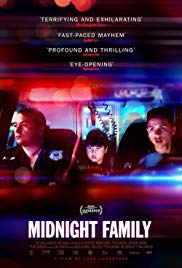 Greetings again from the darkness. It would be easy to question why a family would choose to run a private ambulance service in a city where they may or may not get paid. It’s only when we know one stunning statistic that their reasoning becomes clear. In Mexico City, the government operates only 45 ambulances for a population of nearly 9 million people. Director-cinematographer-editor-producer Luke Lorentzen takes us inside the ambulance with the Ochoas as they work the streets in the business they’ve run for almost 20 years … it’s a business that fills a necessary gap in emergency services.

Teenager Juan is the most talkative of the crew that includes his father, a younger brother and a friend of the family. We are never certain whether their service or vehicle is properly licensed, whether they are certified, or even if actual licenses and certifications exist. What we do know is that when a medical emergency occurs, a two-plus hour wait for a city ambulance makes the private services much more appealing … and, quite frankly, necessary.

Mr. Lorentzen serves up some terrific camera work, focusing mostly on the family rather than the patients they are providing service for. In the blink of an eye, the Ochoa family goes from utter boredom to a life-and-death situation where response time is crucial. Timing is important not just for medical reasons, but for competitive ones as well. Often there are two races occurring – the race to reach the patient, and the race against another ambulance. What is clear is that once on the scene, the Ochoas are very professional and caring … whether it’s a gunshot wound, a child that’s fallen four stories from a window, or a woman who has been physically assaulted by her boyfriend (and needs a hug, as well as an ambulance).

Corruption is everywhere in this cutthroat industry. From a government who refuses proper care for its citizens to a police force accepting bribes to private ambulance services on retainer from certain hospitals. For the Ochoas, the police scanner is as vital to their business as the medical supplies in the back where the youngest brother munches chips between calls. A loudspeaker is necessary as they race through the city streets admonishing cyclists and cab drivers to get out of the way for a medical emergency.

The Ochoas treat hundreds of patients each year, and when they aren’t responding to calls, they are scrubbing the blood from the vehicle or resting up for another stressful night. We hear their philosophy in providing care for those who might not otherwise get to the hospital on time, and we understand this family does care very much about their chosen profession … this in spite of the fact that so many refuse to pay them, or simply can’t afford to. It’s a constant hustle that keeps the family on the edge financially, although they can hold their head up high knowing they provide a valuable service. Lorentzen’s camera work ensures we feel the intensity and stress of each and every call.

This entry was posted on Friday, December 6th, 2019 at 12:25 am and is filed under Documentary. You can follow any responses to this entry through the RSS 2.0 feed. You can leave a response, or trackback from your own site.