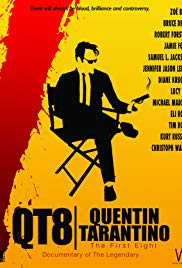 Greetings again from the darkness. Quentin Tarantino has been praised as the cinematic “voice of his generation.” His influence on other filmmakers is as obvious as those who have influenced him. This is a celebration of Tarantino the filmmaker, and also somewhat of a response to his critics. Tara Wood’s documentary never hides that she’s a fan, and to her credit, she hits head-on the 3 controversies associated with her subject: the use of the “N-word”, Uma Thurman’s stunt car accident while filming KILL BILL, and his friendship and business relationship with the despicable Harvey Weinstein.

Tarantino has publically stated that he will retire from filmmaking after directing his 10th film. Ms. Wood’s film covers his first eight, from RESERVOIR DOGS in 1992 to THE HATEFUL EIGHT in 2015. Because this documentary was tied up and delayed in the Miramax quagmire, there is also a brief mention of Tarantino’s 9th film ONCE UPON A TIME IN HOLLYWOOD, released this year. The film kicks off with some background information from Producer Stacey Sher, mentions of his writing for TRUE ROMANCE and NATURAL BORN KILLERS, and a fascinating tidbit involving how QT used his pay from appearing as an Elvis impersonator on “The Golden Girls” to initially fund his career in filmmaking.

Ms. Wood then divides her film into three chapters, thereby categorizing and providing insight on each. “Chapter 1 – The Revolution” includes RESERVOIR DOGS and PULP FICTION, both ground-breakers in their own way and they announced “an astonishing new voice” in movies. The best behind-the-scenes bit comes courtesy of actor and Tarantino regular Michael Madsen who initially objected to being Mr. Blonde, complaining “I didn’t want to get killed by Tim Roth.” Of course, it was PULP FICTION that elevated Tarantino to a new stratosphere – oh, and it also allowed for the stunning comeback of John Travolta.

“Chapter 2 – Badass Women and Genre Play” covers JACKIE BROWN, KILL BILL and DEATH PROOF. The first of those films, each which featured very strong women, was an ode to the Blaxploitation era, the second was influenced by Hong Kong cinema, and the third is described by Zoe Bell as Tarantino’s ‘thank you’ to industry stunt people. Perhaps the most important element of this chapter was that, despite the affirmations, he refused to serve up a repeat PULP FICTION … yet another thing that set him apart from other filmmakers.

“Chapter 3 – Justice” finishes up the catalog with INGLORIOUS BASTERDS, DJANGO UNCHAINED, and THE HATEFUL EIGHT. ‘Basterds’ is renowned for what may be the most fascinating opening sequence in any movie, ‘Django’ shows his love of westerns (especially Italian), and ‘Hateful 8’ stands as a ‘western RESERVOIR DOGS’. With his many references to earlier cinema, Tarantino shows no hesitancy in spinning or changing history to fit his story. While many disparaged the infamous Hitler scene in ‘Basterds’ (and subsequently the Manson killings in his latest), Tarantino firmly believes that viewers know they are watching a movie, and can easily separate this from real life and historical fact. It’s noted that this is what story telling is all about … asking ‘What if?”

Quentin Tarantino has been described as an overzealous geek with the talent to back it up. In reality, he’s a walking and (fast) talking encyclopedia of movie knowledge, trivia and history. He is also described as creating an exuberant infection with cinema, and his frequent scenes of ultra-violence are interpreted by Christoph Waltz as “opera”. It was October 5, 2017 when the Harvey Weinstein story broke, and immediately, since many films connect them, Tarantino was part of the story. It’s a blight on his record, just as it is for countless other actors, celebrities and film industry types who knew and chose to stay silent. But when it comes to making movies, few have ever done it better. There is an on-set clip where Tarantino says “One more take. Why?  Because we love making movies!” It’s clear from the interviews here that QT reveres making movies. He also loves watching movies – so much so that he bought and renovated the New Beverly Cinema. He’s a proud film geek. Ms. Wood’s film is pure pleasure for QT fans and will explain a lot for those who aren’t so sure about his work.

This entry was posted on Wednesday, December 4th, 2019 at 6:03 pm and is filed under Documentary. You can follow any responses to this entry through the RSS 2.0 feed. You can leave a response, or trackback from your own site.