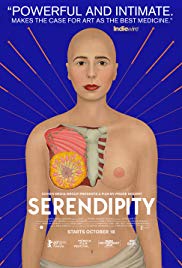 Greetings again from the darkness. 31 years old. It’s an age that can feel old while in fact, it’s so young. Certainly too young for a diagnosis of breast cancer – not that there is ever a right age for such news. New York City-based French artist Prune Nourry was 31 when she was hit with the breast cancer diagnosis, and she turned her journey into a book, published in 2017, and subsequently this blend of art film and personal video journal.

The film opens with the camera on a hospital gurney as it is wheeled through various hallways and into examination rooms. It’s Ms. Nourry’s way of having us join her on her trip through the medical maze. One of the unique aspects of the film is how she connects her current situation to some of her past works. When she learns that she must freeze her eggs for future use before her chemotherapy sessions begin, she ties that into her 2009 art project entitled “The Procreation Dinner”, where the steps of In vitro fertilization are presented in food form … through birth and finishing with a flan breast feeding dessert. It’s at this time where she shows us her eggs magnified under the microscope lens. We now better understand the artist and her way of dealing.

With a mastectomy as first step, Ms. Nourry meets up with Oscar nominated French director Agnes Varda (FACES PLACES, 2017). Ms. Varda passed away earlier this year, but here she assists Ms. Nourry with cutting off 15-18 inches of her beautiful and braided hair so that it can be donated prior to her chemo. The film takes us through the treatment process, which includes the psychological impact of having one’s body altered so drastically. Is the challenge more physical or mental? We can only know that each person reacts in their own way.

Executive Producers of the film include Angelina Jolie and Darren Aronofsky, and while shaving her own head, Prune Nourry shares her philosophy of life that “everything is connected.” With the film documenting much of her art work, she emphasizes that this life philosophy focuses on Health, Life, and Art … just like her film.

This entry was posted on Thursday, October 17th, 2019 at 4:28 pm and is filed under Documentary. You can follow any responses to this entry through the RSS 2.0 feed. You can leave a response, or trackback from your own site.