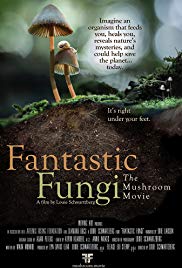 Greetings again from the darkness. Why did the mushroom get invited to the party? Because he’s a fun guy (fungi)! That joke works better when spoken rather than read, but it made me laugh as a kid, even though it wasn’t enough to keep me (and half my classmates) awake during those dull science films in junior high. Documentarian Louie Schwartzberg obviously stayed awake in class, and now he’s showing us how those films should be made … interesting, informative and entertaining.

“We brought life to Earth. You can’t see us. We are mushrooms!” Narrator Brie Larson (yes, Captain Marvel herself) introduces fungus, or more accurately, fungi … since we are told there are 1.5 million species – 20,000 of which produce mushrooms. Despite the presence of Ms. Larson, this isn’t a superhero movie. No, it’s much more important. In fact, the real star of the documentary – other than fungi – is an amateur mycologist named Paul Stamets. That’s right, this informative project devotes much of its time to some guy who just likes science (oh my, does he like it); specifically, the study of fungus and mushrooms. He even tells us some of his personal story, allowing us to connect with a guy who is proud to be known as a mushroom nerd.

Director Schwartzberg is an accomplished documentarian, and noted time-lapse photographer and visual artist. He even uses impressive digital animation periodically to guide us along. He’s also smart enough to complement Mr. Stamets’ observations with input from real life scientists, as well as authors and researchers. Admittedly, it’s not really fair to classify Stamets as an amateur. He has written books and his research has been invaluable to some of the world’s foremost experts.

You may wonder why you should care about fungi. Heck, it’s described as something between vegetable and animal. We hear that it’s been around since the beginning, and that it plays a role in rebirth, reincarnation, and regeneration. This is shown via a memorable time-lapse segment, and with the bold proclamation that Mycelium is “the mother of us all.” We learn how fungi is such a vital part of our existence through medical research, penicillin (and chees), antibiotics, bio-terrorism, psychedelics, and now even the treatment of depression and cancer. Fungi can feed you (it’s good on pizza), heal you, and even kill you. The film is quite a fascinating and educational treat … and a lesson in biological resilience. And I never once fell asleep – my junior high teacher wouldn’t believe it.

This entry was posted on Monday, October 14th, 2019 at 6:33 pm and is filed under Documentary. You can follow any responses to this entry through the RSS 2.0 feed. You can leave a response, or trackback from your own site.