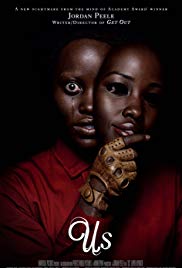 Greetings again from the darkness. Jordan Peele first got noticed on “MADtv,” and then for his impersonation of Barack Obama. His career got a boost with “Key and Peele” with Keegan-Michael Key, and then it simply exploded in 2017 with GET OUT. For that film, he won his first Oscar for Best Original Screenplay, and was also nominated for Best Director (his directorial debut) and for Best Picture (as a Producer). With his follow-up to that breakout film, Mr. Peele has squashed any talk of being a one-hit wonder, and has actually elevated his work with this latest.

The film opens in 1986 as a family is on vacation at Santa Cruz, California. While taking in the amusement park along the boardwalk, their young daughter Adelaide wanders off into a house of mirrors where she comes face to face with her doppelgänger – her exact lookalike. It’s the film’s first creepy moment, but certainly not the last. The story then jumps forward to present day where Adelaide (Lupita Nyong’o, Oscar winner for 12 YEARS A SLAVE), her husband Gabe Wilson (Winston Duke, BLACK PANTHER), and their teenage daughter Zora (Shahadi Wright Joseph) and young son Jason (Evan Alex) are on a getaway to a lake house … one located near their friends Josh (Tim Heidecker) and Kitty Tyler (Elisabeth Moss), and their in sync twin daughters (Cali and Noelle Sheldon). Adelaide is not thrilled when husband Gabe suggests they head over to Santa Cruz beach.

Part of the brilliance of the film is that it works as a straight-forward horror film with some very funny moments (often thanks to Mr. Duke), but its real purpose is to inspire multiple theories along with the corresponding debate. Alternate meanings, metaphors and clues are dropped in most every scene. A toy ambulance, a JAWS shirt, a “Thriller” shirt, a TV commercial for the “Hands Across America” event, and the corresponding VHS tapes next to the family TV only hint at the numerous nods Peele serves up to other films, especially some horror classics.  You’ll note the director chooses an aerial shot not dissimilar to that of Kubrick’s THE SHINING as the family drives towards their vacation spot. Also present (in a couple of scenes) is the reference to bible verse Jeremiah 11:11, and sharp-eyed viewers will spot other references to the double 11.

While the Wilson and Tyler families are visiting on the sandy beach, young Jason wanders off sending mother Adelaide into a near-frenzy with recollections of her night on that same beach so many years ago. Later that evening, the true horror begins. A terrific shot of 4 figures all clad in red at the end of the Wilson’s driveway kicks the film into high gear. More doppelgangers appear and lead us to a subterranean community living in tunnels, and sharing the space with bunnies. We learn of “the tethered”; those who are (mostly) identical to those living above. Those of identical likeness square off in the ongoing battle for survival, and that’s really all you should know before seeing for yourself.

The cast is terrific, especially Ms. Nyong’o, who like the other actors seems to relish playing the dual roles. She also nails the final shot with a smile that will chill you to the marrow. Madison Curry makes a strong impression as young Adelaide, and as much fun as we have with the characters, the true joy lies in trying to “catch” all that filmmaker Peele throws at us. That final wall of folks in red is pretty easy to decipher, but some of  the little clues and prods require a second viewing. It’s fascinating and historic that Jordan Peele’s follow up movie could possibly make this yet another horror movie contending at Oscar time. One site currently places the odds at 19/1 to win Best Picture at the 2020 Oscars. If you are up for a fun little horror movie that’s also a mind-bending societal commentary on those who are born into privilege and those who aren’t, then Mr. Peele has just the flick for you.

This entry was posted on Monday, April 1st, 2019 at 8:12 pm and is filed under Fantasy, Horror, Thriller. You can follow any responses to this entry through the RSS 2.0 feed. You can leave a response, or trackback from your own site.