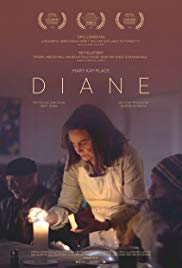 Greetings again from the darkness. In a film that is both grounded in realism as well as playing like an ode to underappreciated character actresses, our wonderment turns to full comprehension once we realize this is the work of Kent Jones. Mr. Jones is one of today’s foremost authorities on film, having been a respected film critic, served as director of the Film Society of Lincoln Center, and delivered a tremendous documentary showcasing the conversations of two more publicized film experts with 2005’s HITCHCOCK/TRUFFAUT. In other words, he’s a man who loves cinema and has both a trained eye and an instinct for what makes a film worth watching.

Mary Kay Place (THE BIG CHILL, 1983) is Diane. Our first reaction upon seeing her is that she has the well-worn, hangdog look of a woman burdened by life. As we follow her around, we soon learn that’s very true and that there is even more to her story. Diane is the kind of person who, rather than keep a list of things to do, keeps a list of people for whom she has to do things. And there are many on her list. Chief among these are her dying cousin Donna (Diedre O’Connell) and her drug-addicted son Brian (Jake Lacy). The self-imposed penance Diane pays all day each day stems from a story referred to as “The Cape” … a long ago act of betrayal and indiscretion that has clung to Diane ever since.

The rest of the cast is filled with faces you’ll recognize (and names you can’t recall), many for their work in the 1960’s, 1970’s and 1980’s, including: Estelle Parsons (Best Supporting Oscar winner for BONNIE AND CLYDE, 1967), Andrea Martin (MY BIG FAT GREEK WEDDING, 2002), Joyce Van Patten (sister of Dick, ST ELMO’S FIRE, 1985), and Glynnis O’Connor (ODE TO BILLY JOE, 1976). But don’t mistake this for some nostalgic tribute – each of these women offer up exactly what’s needed for their respective characters. It’s a joy to behold their work – and easy to take for granted.

This little Massachusetts community is tight-knit and speaks freely on the lives of each other. There are few secrets. Everyone asks Diane about Brian – her son that lies to her face, acts perturbed when she tries to help, forces her to listen to bible-thumping, and finally comes clean on why he’s treated her the way he has. Filmmaker Kent’s first narrative feature is an organic character driven story about aging, carrying a burden, striving to make amends, and suppressing true feelings by constantly serving others. When Diane writes in her journal, “My loved ones are gone and I’m left to be”, it takes her (and us) closer to her soul than any soup kitchen possibly could. Casserole dishes can only heal so much, and a lead role for a respected actress serves us all.

This entry was posted on Sunday, March 31st, 2019 at 8:06 pm and is filed under Drama. You can follow any responses to this entry through the RSS 2.0 feed. You can leave a response, or trackback from your own site.