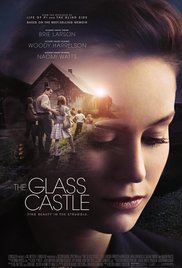 Greetings again from the darkness. We all have our stories. The stories that make up our life. Some of us dwell on the “bad” things, while others remember only the good times. A few even romanticize the past, which could also be termed embellishment. Where exactly on this scale that Jeannette Walls’ story falls is debatable, but the facts are that her life story is the foundation for a best-selling book and now a high-profile movie.

Ms. Walls’ memoir describes her unconventional childhood with bohemian parents who cared more for freedom and independence than for feeding their kids. Writer/Director Destin Daniel Cretton (a ‘must-follow’ filmmaker after his powerful 2013 indie gem SHORT TERM 12) chose this as his next project, co-wrote the screenplay with Andrew Lanham, and wisely opted to work again with Brie Larson, who stars as the oldest Jeannette (from late teens through adult).

The film bounces around in time from Jeannette’s childhood in the 1960’s and 1970’s to her time as a New York gossip columnist in 1989. The timeline isn’t all that bounces, as we watch this family of six, seemingly always on the run, ricochet across America with all their belongings strapped to the top of the battered station wagon – usually on the run from creditors or following the latest dream from Rex (Woody Harrelson).

Rex is the type of guy who rants against most everything that makes up what we know as society. He can’t (or won’t) hold a job and fills his trusting kids’ heads with hopes and dreams of a better tomorrow – going as far as drawing up plans and specs for the off-the-grid fantasy home referenced in the title. Rex then spends what little money the dirt poor family has on drinking benders which cause him to become a nasty, abusive threat.

Rex’s wife Rose (Naomi Watts) is a free-spirited artist who somehow possesses even fewer parental instincts than her husband. Although she could be labeled an enabler of his abusive ways, she might actually be the more interesting of the two, even if the story (and Jeannette) focuses much more on Rex. The best scene in the movie is when mother and grown daughter share a restaurant booth, and the two worlds collide.

Of course the real story here is how Jeanette managed to rise above this less-than-desirable childhood and achieve her own form of freedom as a writer. The stark contrast between the squalor of her West Virginia shack and the million dollar apartment she later shares with her fiancé (Max Greenfield) makes this the ultimate depiction of the American Dream – pulling yourself up by your bootstraps (even when you don’t have boots).

The acting is stellar throughout. Mr. Harrelson could garner Oscar attention as he manages to capture both the dreamer and failure that was Rex. Ms. Watts maximizes her underwritten role and turns Rose into someone we believe we know and (at least partially) understand. Ms. Larson embodies both the desperation of a teenager whose environment forced her to be wise beyond her years, and the iciness of a grown-up trying so hard to leave the past behind. In just a few scenes, Robin Bartlett manages to create a memorable and horrific grandmother – one whose actions explain a great deal. The most remarkable performance of all, however, belongs to Ella Anderson (the only good thing about THE BOSS). She captures our hearts as the adolescent Jeannette – the closest thing to a parent this family had.

There are some similarities between this film and last year’s expertly crafted CAPTAIN FANTASTIC. In fact, two of the young actors (Shree Crooks, Charlie Shotwell) from that film also appear in THE GLASS CASTLE. The biggest difference being that Viggo Mortensen’s character could be considered to have an over-parenting approach, while Woody Harrelson’s Rex never over-did anything, except drink and dream.

The movie probably has a bit too much Hollywood gloss and sheen to adequately portray the hardships of a large family living in poverty, though the top notch acting keeps us glued to the screen. By the end, we can’t help but wonder if some of Ms. Walls’ romanticism of her father and past might be due as much to her immense writing talent as to her childhood challenges.

This entry was posted on Thursday, August 10th, 2017 at 9:17 pm and is filed under Drama. You can follow any responses to this entry through the RSS 2.0 feed. You can leave a response, or trackback from your own site.