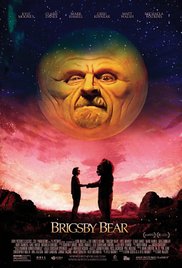 Greetings again from the darkness. Many kids get obsessed with their favorite TV show and characters. Perhaps it’s Minnie Mouse, Sesame Street or even Teenage Mutant Ninja Turtles. Whatever or whomever it is, they typically enjoy sharing their experiences with their friends. When we first meet James, he is staring, fully-engaged, at an odd, poorly produced show that appears to be a relic from the 1970’s. His room is packed with franchised merchandise like a bedspread, a lamp, toys, and even a stuffed animal. We immediately notice two problems: we don’t recognize this talking TV bear and James appears to be not a child, but a twenty-something with a 3 day beard growth.

Kyle Mooney has gained a following with his work (especially his quirky short films) on “Saturday Night Live”. Here he collaborates with director Dave McCrary (another SNL stalwart) and co-writer Kevin Costello on their first feature film. Mr. Mooney also stars as James, the “Brigsby Bear” expert who was kidnapped as an infant, held captive in a desert bunker and brainwashed by his captor “parents” Ted and April (an excellent Mark Hamill, Jane Adams).

Being confined and isolated in a controlled environment with only artificial culture in no way prepares James for the long-delayed release back into the wild known as society. His biological parents Greg and Louise (Matt Walsh, Michaela Watkins) are thrilled to reunite with their long lost son, and very patient with James’ struggles to assimilate.

James is unceremoniously dumped into the real world without his one security blanket: a TV bear that doesn’t exist. He goes from being disconnected from the outside world to being disconnected inside a new world he doesn’t know or recognize. Despite the pressures he is up against (police, family, new friends), he refuses to let go of his obsession.

It’s at this point where we really root for Mooney and McCrary to embrace the weirdness. Instead, the story takes a bit of a conventional turn and we find ourselves no longer reveling in oddity, but instead cheering for James to continue influencing those who initially viewed him as the proverbial fish out of water. The film ends up as a creative story about creativity … if that’s what it’s about (or if it’s about anything).

Strong supporting work is provided by Greg Kinnear as Detective Vogel (with a secret passion), Ryan Simpkins (sister of Ty) as James’ somewhat reluctant sister, and Alexa Demie and Jorge Lendeborg Jr as the new friends who come to appreciate him for his perspective. Claire Danes is a misguided psychiatrist, Buck Bennett is a detective, Andy Samburg appears an acquaintance, and Kate Lyn Scheil is Arielle (and Nora).

The film can best be described as Funny-Sad, and a blend of ROOM (isolated and held captive), NAPOLEON DYNAMITE (a quirky dude), BEING THERE (an innocence that influences others), and ENCINO MAN (a guy being introduced to a new world). It has an emotional and heartfelt climax that is crowd-pleasing, and certainly deserves bonus points for not being a superhero movie, remake, sequel or reboot. Still, it leaves us wondering what direction this could have gone had the filmmakers remained true to the cause of embracing the weirdness.

This entry was posted on Thursday, August 10th, 2017 at 10:33 pm and is filed under Comedy, Drama. You can follow any responses to this entry through the RSS 2.0 feed. You can leave a response, or trackback from your own site.