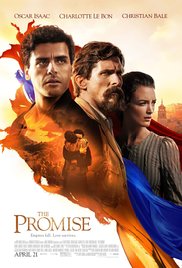 Greetings again from the darkness. I’ve said this before, but mixing romance with historical war time dramas is fraught with peril – it’s a difficult line to navigate for a movie. Writer/director Terry George (Hotel Rwanda) and co-writer Robin Swicord (The Curious Case of Benjamin Button) have delivered a sweeping historical epic that is immensely watchable by not over-blowing the romantic triangle, the war atrocities or the courage and bravery of the main characters.

The one-too-many lovers are played by the talented Oscar Isaac as medical student wannabe Mikael; Christian Bale as Chris, an American war correspondent; and blossoming international star Charlotte Le Bon as Ana, an American tutor based in Constantinople. These are three varied and distinct characters we accept because they have admirable qualities, as well as human flaws.

Mikael marries a local girl (Angela Sarafyan who was the robot with hypnotizing eyes HBO’s “Westworld”) for the sole purpose of using the dowry to pay for medical school. His “promise” is that he will return and learn to love her (so romantic!). Chris is a hard-driving and hard drinking journalist who is not welcome most anyplace he goes and finds himself in quite a predicament with his job, girlfriend and life. It’s not until later in the story that he flashes a caring heart underneath his armor of brash. Ana is nearly angelic at times in her goodness and with a smile that lights up the screen. Her devotion to Chris is as odd as her attraction to Mikael, but seeking logic in matters of love is often a journey without merit.

The story is based around the time of WWI and specifically highlights the Armenian Genocide – something the Turkish government denies to this day, referring to it instead as a “relocation” of nearly 1.5 million Armenians. The film began as a passion project for Armenian-American Kirk Kerkorian, a businessman, philanthropist and the once owner of MGM Studios. He raised the money and helped assemble the team, but unfortunately passed away just before production began. He would undoubtedly be proud of the finished film, and find some solace (if not humor) in the fact that it hits theatres only a few weeks after The Ottoman Lieutenant, a Turkish government backed project that purposefully ignored the atrocities and leaned heavily to a singular view of history.

The cast is deep and includes (one of my favorites) Shohreh Aghdashloo as Mikael’s wise and courageous mother, Tom Hollander (“The Night Manager”) as a fellow prisoner of the Turks, James Cromwell as an American Ambassador, Rade Serbedzija as a leader of the Armenian resistance, and Jean Reno as a commander of the French Naval fleet that plays a vital role in 1915.

Cinematographer Javier Aguirresorobe captures some breathtaking vistas and desert landscapes, while also delivering the intimacy and urgency of both the romantic and dangerous moments (including a spectacular rain-drenched train sequence). The acting is superb throughout, with Bale dialing back his sometimes over-exuberant traits, Isaac giving us someone to pin our hopes on, and Ms. Le Bon bringing the compassion to an area when it’s so desperately needed. Expect to see her explode in popularity and respect when the right leading role comes along. Lastly, it’s rare that I would think this, but the film’s 2 hour and 14 minute run time might have benefited from an additional 10-15 minutes of detail towards the Turkish military strategies, and both the Armenian resistance and slaughter. It’s a part of history that should be neither ignored nor glossed over.

This entry was posted on Wednesday, April 19th, 2017 at 9:10 pm and is filed under Drama, War. You can follow any responses to this entry through the RSS 2.0 feed. You can leave a response, or trackback from your own site.