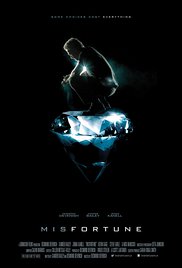 Greetings again from the darkness. Sporting the vibe of two buddies making a movie on their own terms, the film plays like a late night B-movie that would be perfect for one of those sleepless nights. Writer/director Desmond Devenish and co-writer Xander Bailey also star in their own movie … a decision that implies passion project and low budget (both of which can be good or bad).

Nothing in the script is new or groundbreaking, as we have a jewelry store robbery that ends in a double-cross and shootout among partners in crime. This is followed by a 7 year flash forward with the son of the dead partner seeking revenge for his father’s death, and the early-paroled partner on the hunt for the stolen diamonds. Of course, there is nothing wrong with a dose of familiarity as long as the characters and setting are interesting.

The original two partners are played by a couple of familiar and excellent actors: Kevin Gage as Mallick and Nick Mancuso as Roman. Both have great screen faces and voices, and we are left wishing these two could go at each other a bit longer. Also in the mix is Steve Earle, friend to Roman and later his son. Once Mallick is paroled, it’s filmmakers Devenish as Boyd and Bailey as Russell that get most of the screen time – along with Jenna Kannell (a Neve Campbell lookalike) as Boyd’s girlfriend Sloan.

After the worst (unintentionally comical) rock climbing movie scenes ever, we get more shootouts and double-crossing … although Carl Bailey as the Sheriff adds a quick dose of realism and interest. The film would have been better served with a more experienced actor in the role of Boyd, though Xander Bailey does a very nice job in the mostly thankless role of Russell.

The film squanders the desert setting and could have followed the model of last year’s Mojave (with Oscar Isaac), which put the desert front and center as a character unto itself. From a filmmaking perspective, it’s difficult to determine if budget limitations minimized the suspense and conflict, or if that was more script related. The one sure lesson here is … don’t squander the talents of Nick Mancuso or Steve Earle!

This entry was posted on Wednesday, June 15th, 2016 at 6:01 pm and is filed under Drama, Thriller. You can follow any responses to this entry through the RSS 2.0 feed. You can leave a response, or trackback from your own site.