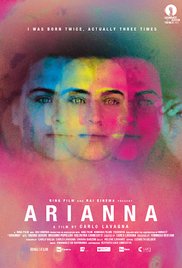 Greetings again from the darkness. Many of us while away the time pondering the meaning of life. We have that luxury, as most of us have already traveled the road of self-discovery … a road that is a bit more twisty and windy for others. The opening dialogue of first time director Carlo Lavagna’s movie takes away any possibility of a trendy or Hollywood twist. The titular character discloses that she has been born three times: once as a boy, once as a girl, and finally as understanding who she is.

As kids, we are so dependent on and trusting of our parents. Of course this is out of necessity and naivety, and as we mature, we learn our parents are merely human beings – hopefully acting in our best interest. We first meet Arianna (Ondina Quadri) as a 19 year old girl returning to the old family vacation home with her parents for the first time since she was 3 years old. Arianna is on hormone therapy due to her body being slow to develop (small breasts, no menstrual cycle). She has been under the care of a gynecologist arranged by her doctor-father, and has grown increasingly frustrated at her lack of progress into womanhood.

Arianna wonders why her mother acts so odd, and is taken aback when a neighbor asks where her brother is. All of this occurs with a picturesque Italian backdrop of greenery, rain and swimming holes. As she slowly unravels the near-lifelong mystery, we as viewers experience a constant feeling of dread for her … though her story is handled with dignity and empathy throughout. Arianna tries so hard to be “normal”, and even partially excuses her parents for acting in what they thought was her best interest.

First time actor Ondina Quadri is terrific in the lead role. She looks a bit like a young Joaquin Phoenix in Parenthood, and is totally believable as someone trying to understand who they are, and then come to grips with being placed half way between the two socially accepted genders. It’s a peek into the biological condition known as intersex, as well as the correlating theory of gender-assignment. Mostly it’s a touching story of a 19 year old that allows us to feel her frustration, and it’s presented in a beautifully paced manner by a talented new filmmaker.

This entry was posted on Sunday, April 17th, 2016 at 12:03 am and is filed under Drama. You can follow any responses to this entry through the RSS 2.0 feed. You can leave a response, or trackback from your own site.