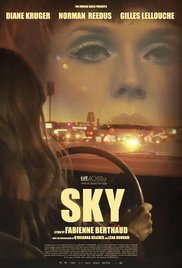 Greetings again from the darkness. Remember that time you bashed your lover in the head with a lamp, left them bleeding on the floor, and then drove around for 3 days before turning yourself in to the police, confessing to what you assumed was a murder? And then remember how emotionally free you felt when it was discovered that not only was he/she alive, but they didn’t even blame you for the head injuries? Well that’s exactly what Diane Kruger’s character, Romy, goes through during the first part of the film.

Romy and her husband Richard (Gilles Lellouche) have travelled to the southwestern United States from their home in Paris. It’s pretty clear that their hope is that this vacation will reignite the passion they once had and break them out of their marital slump. A few too many drinks at the bar leads to some unwanted amorous advances, and in the heat of the moment, Romy starts whacking Richard in the head with the lamp.

Her self-discover phase takes her to Las Vegas – courtesy of a truck driver played by Lou Diamond Phillips. Within a short period of time, she has befriended a lady (Laurene Landon) who wears a bunny suit in order to pose for pics with tourists. Romy borrows the bunny suit and meets a mysterious cowboy (Norman Reedus) named Diego. It’s the relationship between Romy and Diego that dominates the final 2/3 of the film, and though they both create interesting characters, it’s a bit of a letdown after the story’s set up with the French husband.

Lena Dunham has an odd turn as Diego’s sister-in-law, and there is a dose of spirituality from Native Americans, but mostly this is Diane Kruger’s movie. She seems to be enjoying the wide range of emotions while showing off her talents, and she keeps us interested enough to keep watching … even when the pace slows to a crawl.

This entry was posted on Saturday, April 16th, 2016 at 11:57 pm and is filed under Drama. You can follow any responses to this entry through the RSS 2.0 feed. You can leave a response, or trackback from your own site.