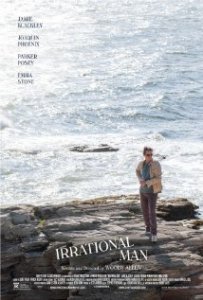 Greetings again from the darkness. Woody Allen turns 80 years old later this year, and he continues to crank out a new movie every 12 -15 months. While his production level is impressive, many of his films cause us to question if possibly fewer films, each receiving a bit more attention to detail, might prove more effective. Revisiting one of his favorite themes – life is meaningless – this latest provides a funked-up burned-out philosophy professor as our tour guide.

We feel for the three lead actors: Joaquin Phoenix, Emma Stone, and Parker Posey. Somehow all three roles are underwritten, causing some awkward moments on screen as these talented folks grasp for inspiration or direction in many scenes. The character of Abe (Mr. Phoenix) is introduced as a brilliant mind and popular teacher who has a reputation of being intimate with his students. When we first see him, he’s but a paunchy, alcoholic shell of a man … nearly oblivious to social graces. Jill (Ms. Stone) is the talented and gregarious student, and daughter of two professors, who should be entirely too smart to fall for anyone as self-loathing and careless as Abe. Drawing the shortest of all short straws is Ms. Posey as the stereotypical middle-aged woman seeking excitement somewhere other than her stable husband.

Evidently quoting Kant is designed to provide depth to character and story, and trick us into thinking existentialism is the only topic worthy of discussion … as long as it occurs while sucking down beer and nursing a flask. We are to believe that Abe’s decision to carry out a horrific crime can be justified since the victim was not a “good person” and it leads to a shift in attitude and renewed interest in life and yes, even sex. The film’s title does little to extinguish the writer/director’s apparent belief that questionable personal actions do not make a bad person. It seems real life and cinema have intersected yet again.

There are many topics touched on here, though unfortunately the story merely scratches the multiple surfaces. The professor’s reputation precedes his arrival, but we are never given any indication what makes him brilliant … what makes him popular with students … or what makes him attractive to so many. The idea of a crime being justified if the victim is not a credit to society has been explored much better in numerous other stories. Murder acting as Abe’s muse may be the most intriguing aspect of the script, but it’s treated mostly as a gimmick and never allowed to fully develop. Lastly, there are a couple of lines that seem to contradict each other. One is related to whether a passionate thinker can change the world, while the other says “wishing doesn’t work”. Again, these competing thoughts could have been explored and provided more thought-inducing moments. Instead, we are left with an excellent jazz score (especially the Ramsey Lewis Trio) on a paved road with few answers to the basic philosophical questions offered up by default.

This entry was posted on Thursday, July 30th, 2015 at 8:59 pm and is filed under Comedy, Drama. You can follow any responses to this entry through the RSS 2.0 feed. You can leave a response, or trackback from your own site.