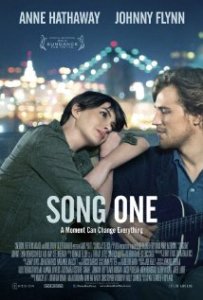 Greetings again from the darkness. Fresh off her Oscar winning performance and infamous onscreen haircut in Les Miserables, Anne Hathaway stars in this infinitely smaller film from writer/director Kate Barker-Froyland.  A Sundance Film Festival entry, the movie winds through the clubs, coffee shops and second hand stores that make up the indie music scene in northern Brooklyn.

Ben Rosenfield (“Boardwalk Empire”) plays Henry, the kind of musician so enamored with his own folk sound that he is willing to play for pocket change in the subway tunnels. Failing to adhere to mother rule #1, Henry pays the price for not looking both ways prior to crossing a street in front of a New York cabbie. Next thing we know, he is comatose in a hospital bed. Henry’s mom (Mary Steenburgen) beckons wayward daughter Franny (Anne Hathaway) home from her worldly pursuit of a Ph.d in Anthropology.

When last they spoke Franny and brother Henry had one of those nasty sibling fights where angry words were spoken and no apology followed. It’s been six months and now a guilt-ridden Franny sits by his hospital bed hoping for a shot at redemption. She soon discovers Henry’s journal and begins re-tracing his favorite hang-outs and bands. This journey leads her to a meeting with Henry’s musical idol James Forester (played by Johnny Flynn). Lacking suspense, the story leads right where one would expect – James and Franny taking a liking to each other, Franny discovers her own love for music, and the songwriting block that has burdened James slowly breaks down.

The film is at its best in the musical moments. Flynn is a very talented guy as a musician (not so much as an actor), and 5 or 6 live musical acts make appearances as the story unfolds. Most of the quiet scenes between Hathaway and Flynn seem a bit awkward, but not awkward in the good way that leads to real romance. Connection and re-connection are quite common in times of tragedy, as we are at our most emotionally vulnerable state. The biggest issue here is that everything develops just as we would expect … no surprises, no twists. Even the re-connection of Franny and her mother is a sweet scene where Franny sings along to America’s “I Need You”.

Jenny Lewis (of Rilo Kiley fame) and Jonathan Rice co-wrote the original songs used in the film, and as stated, a hand full of other bands perform their own material. For a musically based romantic drama, it does have a couple of really nice scenes, but for the most part, the drama and romance lag the music.

This entry was posted on Wednesday, January 21st, 2015 at 9:07 pm and is filed under Drama. You can follow any responses to this entry through the RSS 2.0 feed. You can leave a response, or trackback from your own site.