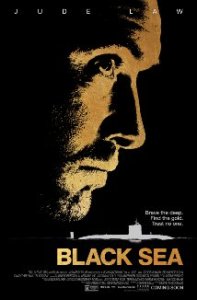 Greetings again from the darkness. One of my first favorite TV shows as a little kid was “Voyage to the Bottom of the Sea”. Each week I sat wide-eyed in front of the tube (yes, it was actually a cathode ray tube back then) anxiously awaiting underwater adventure. It wasn’t until later that I discovered Irwin Allen’s 1961 movie of the same name, and more importantly, Jules Verne’s novel “Twenty Thousand Leagues Under the Sea”, which featured the wild exploits of Captain Nemo and the Nautilus.  Since then, count me in for just about any movie based aboard a submarine (Down Periscope being a rare exception).

Director Kevin MacDonald is best known for his excellent 2006 film The Last King of Scotland (with Forest Whitaker’s Oscar winning performance as Idi Amin). This time he works with a script from playwright Dennis Kelly to deliver a gritty, tense thriller that is lacking any traditional Hollywood fluff … it’s a down and dirty look at greed, desperation and the survival instinct.

Inherent to a story based aboard a submarine is the immediate and constant threat of claustrophobia and death. This one adds another element of danger by blending a crew of Russians and Brits with the goal of bringing back millions of dollars in gold locked away on a sunken German U-Boat in the Black Sea waters. Lest you think the Russians are just another group of southern California actors faking the accent, director MacDonald confirmed that he cast actual Russian actors – including Grigoriy Dobrygin (A Most Wanted Man), Konstantin Khabenskiy (one of the most popular actors in Russia), and three others named Sergey, which MacDonald acknowledged contributed to on-set confusion. This decision elevates the onboard tension between adversarial characters to an armrest-gripping level. Yet another slightly psychotic Ben Mendelsohn (Animal Kingdom) role doesn’t hurt, either.

Jude Law continues the second phase of his career – far removed from his pretty boy early films – as a tough, revenge-seeking sub captain fired by his long-time employer. Should you doubt Law’s acting range, I would recommend not just this film, but also last year’s Dom Hemingway (a raucous ride). Law’s performance here is very strong as he transforms from a p.o.’d former employee to an eye-on-the-prize, win-at-all-cost treasure seeker. The onboard tension mounts every time there is interaction between the Russians and Brits, and Law’s character attempts to mediate. The progression of this three-way dynamic is fascinating to watch as it unfolds.

To provide that true underwater feeling, MacDonald filmed some scenes onboard an old Soviet submarine that is moored in the River Medway in Kent (UK). We never have that feeling of Hollywood soundstage; instead we as viewers share in the tight space and constant dread. This combination of characters, setting and mission deliver an intense thriller that is sure to please, and feels uncommonly welcome this early in the year.

The pinnacle of submarine movies is Das Boot (1981), a must-see for any movie lover. Other popular sub films include Crimson Tide (1995), The Hunt for Red October (1990), and K-19: The Widowmaker (2002), and for those of us who are fascinated by life (and possible death) under the sea, we gladly welcome a new entry to the sub-genre, especially one as well made and tension-packed as Black Sea.

This entry was posted on Wednesday, January 21st, 2015 at 9:33 pm and is filed under Drama, Thriller. You can follow any responses to this entry through the RSS 2.0 feed. You can leave a response, or trackback from your own site.