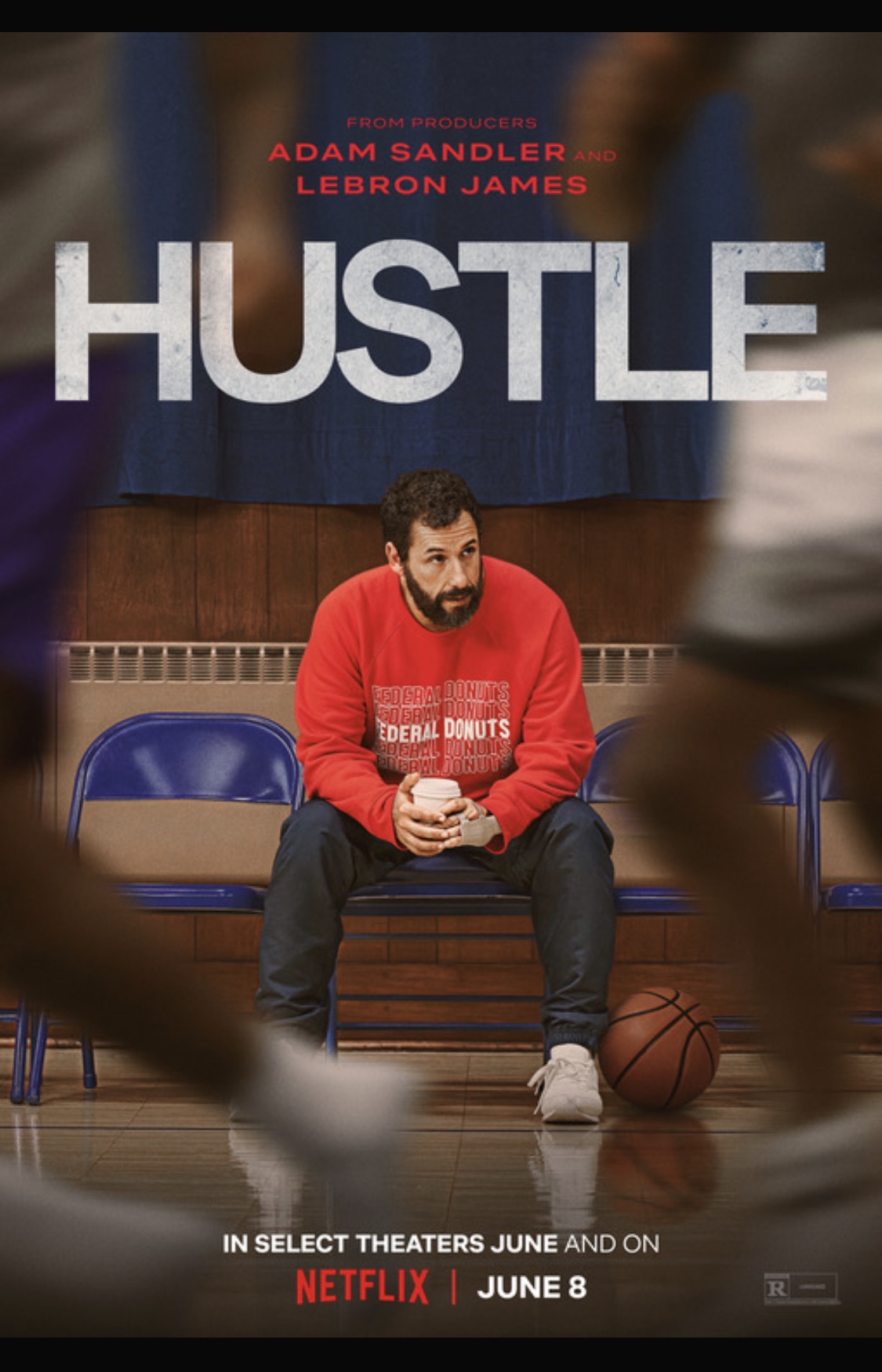 Greetings again from the darkness. As a sports fan and movie fan, I approach every sports movie with trepidation and low expectations. Let’s face it, most actors aren’t great (or even good) athletes, and most athletes aren’t great (or even good) actors. We would have no interest in a western where the cowboys can’t ride horses, just as we have no interest in watching John Goodman portray a baseball legend in THE BABE (1992). I tell you this to convey my state of mind while preparing to watch this basketball movie from director Jeremiah Zagar and co-writers Will Fetters (A STAR IS BORN, 2018) and Taylor Materne. It gives me pleasure to say that even though the premise is kind of similar to Kevin Bacon’s 1992 film, THE AIR UP THERE, this one should satisfy most sports and basketball fans.

Adam Sandler stars as Stanley Sugermen, a long-time scout for the Philadelphia 76’ers. An opening montage gives us a taste of why he’s worn out and beaten down after so many years on the road. Rushing to catch flights, too many fast-food meals, crashing in one hotel after another, and chasing down tips on the next great player … it all adds up to frustration and too much time away from his wife Teresa (Queen Latifah) and teenage daughter (Jordan Hull). Feeling unappreciated and questioning his professional future, Stanley is ecstatic when the long-time Sixers owner played by (Oscar winner) Robert Duvall promotes Stanley to assistant coach. Unfortunately, the dream-come-true turns into a nightmare when the beloved owner dies, leaving his cocky son Vince (Ben Foster) in charge of the team. Vince has little respect for Stanley and promptly sends him back on the road.

It’s in Mallorca, Spain where Stanley stumbles on a nighttime game at a local outdoor court. Immediately catching his eye is an intense, lanky player in work boots. NBA player Juancho Hernangomez stars as Bo Cruz, a true previously undiscovered diamond in the rough. The dream of all scouts is to be the first to find a transcendent player, and once they hear the NBA minimum salary, Bo’s mother and young daughter are on board with Stanley taking Bo to the United States. Of course, things don’t go according to plan. Vince rejects Bo, and a history of anger issues comes back to haunt Bo. Stanley ignores the naysayers, trusts his instincts, and takes on the project of preparing Bo for the scouting combine. The training montage is very well done, as Sandler and Juancho are both believable and draw us in for support.

Cinematographer Zak Mulligan and director Zagar deserve credit for filming the basketball sequences in a style that highlights the athletic talent without resorting to cheap editing tricks. Of course it helps that the basketball sequences are loaded with actual NBA players and playground legends. These guys look like they can play because they CAN. I’ll leave the closing credit montage to highlight most of those involved, but a couple of standouts include Boban Marjonovich and Anthony Edwards, the latter playing Bo’s head-game nemesis, Kermit Wilts. Also making appearances are Kenny Smith as a player agent, and the great Julius “Dr J” Erving, who has a couple of scenes.

When most people think of Adam Sandler, his long list of sophomoric and absurd man-child movies come to mind. Certainly, he can’t be blamed for giving the masses what they want. It’s made him a very rich man. However, his talent in more dramatic roles should not be ignored. The recent UNCUT GEMS and THE MEYEROWITZ STORIES are examples, and going back further, his turn in PUNCH DRUNK LOVE remains one of his best. As Stanley Sugermen, Sandler injects humor into his love of basketball, tossing in a couple of ‘soccer’ and ‘geezer’ jokes. Overall, he successfully captures the essence of an everyman seeking redemption for his self and his family.