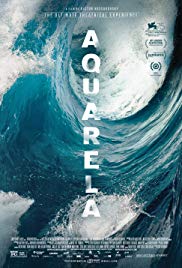 Greetings again from the darkness. This is not your father’s Nature documentary. It’s more like Mother Nature giving us a glimpse at her most beautiful, peaceful, ferocious and terrifying self. And it’s just water. Simple H2O. Only it’s not so simple. In fact, water takes many forms, and Russian filmmaker Victor Kossakovsky serves up some stunning water photography from around the globe.

The film begins with a rescue team working frantically to pull out a car that has fallen through the ice. When the camera finally does pull back, we see the vast space of the lake covered in ice. Other cars speed across the frozen body of water as if it’s a sport or thrill for the driver. When another mishap occurs, we realize the tragedy is blamed on ice that has melted “3 weeks” earlier than usual. So we brace ourselves for another lecture on climate change.

It’s a lecture that never comes. Surprisingly, there is no narrator. Perhaps Morgan Freeman signed a non-compete with the penguins. Kossakovsky allows the camera and nature to show the story, albeit with periodic musical accompaniment from composer Eicca Toppinen – sometimes with heavy metal chords, sometimes with soothing strings. Filmed in Greenland, Venezuela, Siberia (Lake Baikal), and Miami, Florida, where we see the effect of Hurricane Irma, water is shown in its glory. At times peaceful, at times violent. A sailboat captain fighting a storm might be followed by a breath-taking waterfall, which might be followed by a flooded town … and even a swimming horse is photographed underwater.

Waves, glaciers, whales and dolphins combine for an unusual cinematic experience, and the most staggering sound comes courtesy of the ice moaning and water running. It’s one best enjoyed with theatre screen and sound, and a film that will likely lose something even on the finest home systems.  Filmed at 94 frames per second (rather than industry norm of 24 or 48), the visuals are truly breathtaking … and sometimes disorienting. As George (on “Seinfeld”) once said, “The sea was angry that day, my friend”; and now we have witnessed the anger for ourselves.