Greetings again from the darkness. If most people realized how obnoxious they were as teenagers, we’d likely have far fewer folks opting to be parents. Actor-turned-director Simon Bird, in his first feature film, portrays the awkward, frustrating, and sometimes bitter relationship between a confused and directionless teenage boy and his divorced, well-meaning, single mom. The screenplay was written by Bird’s wife, Lisa Owens, and adapted from Joff Winterhart’s 2012 graphic novel.

Daniel (a terrific Earl Cave) is a 15 year old boy who is obsessed with heavy-metal music and resents pretty much everything else in life. He’s a droopy boy who can’t be bothered to shampoo his hair, and the only energy he expends is with snarky comments to his devoted mother, Sue (an outstanding Monica Dolan), who is clueless on how to connect with a son who bears little resemblance to the younger boy she fondly recalls raising. Sue is diligent with her work as a librarian, and tries to instill some ambition in Daniel by having his seek employment.

Daniel sinks into an even lower funk when the dad he worships cancels the boy’s much anticipated trip to Florida for a visit. Of course, Sue subtly points out that dear old dad may not be the best idol for her son, but those cautions fall on deaf ears. Instead, Daniel labels Sue, “the most boring person in the world”. Their time together is cringe-inducing, as Sue does her best to convince Daniel they can have fun, despite his disappointment.

The interesting aspect of the film is derived from its structure as a comedy, while the undercurrent of sadness and isolation is ever-present. Sue is thrilled when Douglas (Rob Brydon), a history teacher, asks her out on a date. At the same time, Daniel’s best (only?) friend Ky (Elliott Speller-Gillott) encourages him to pursue his dream as a front man for a local metal band … resulting in one of the film’s funniest and strangest segments. Neither Sue’s date, or the aftermath, nor Ky’s attempt to help his friend go according to plan.

Much of the soundtrack comes courtesy of Belle & Sebastian, and the uses of musical montages actually takes away from the otherwise realistic interactions between these characters. In addition to Brydon and Speller-Gillott, Alice Lowe has a welcome supporting role as Sue’s more socially-inclined sister, but this film belongs to Mr. Cave and Ms. Dolan. Most parents can relate to Sue’s challenges, and most adults who can be honest with themselves in retrospect, will likely recognize some of their own behavior in Daniel. The nuanced behavior and witty humor is handled well, and that deeper emotional level elevates the film for those who care to dig in.

Available in theatres, Virtual Cinema, and streaming platforms on February 19, 2021 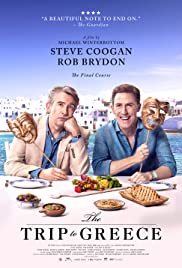 Greetings again from the darkness. Now is either the absolute best time to release this movie, or it’s the worst. During a pandemic with directives to stay home, you would be excused for classifying a cinematic travel trip by funny buddies as either a harsh prank or a welcome fantasy. Director Michael Winterbottom is back for his fourth film in the franchise featuring wise-cracking pals Steve Coogan and Rob Brydon. The first three were: THE TRIP (2010), THE TRIP TO ITALY (2014), and THE TRIP TO SPAIN (2017), and each were edited into feature films from their respective BBC Television series.

The players remain the same, as does the formula. Only the location provides a change-up. Beginning in Turkey near the historical site of Troy, complete with the photo op at the Trojan Horse monument, Coogan and Brydon are on a 6 day assignment to cover (mostly) the 10 year journey of Odysseus in Homer’s “The Odyssey.” The symmetry is noted in the film as this marks the tenth year since they first began traveling together.

The men make their way to Stagira (now Macedonia), the birthplace of Aristotle, as well as Hydra, Athens, Delphi, and Ithaca. Of course, at each destination, the boys stop for a ridiculously upscale gourmet meal at a world class restaurant that features a breathtaking view. It’s during these savory meals, and in the car during the trip, and well, just about any other time, Coogan and Brydon continue their never-ending game of one-upsmanship. Impersonations, punchlines, and spirited verbal sparring are all done with the hope of making the other person laugh, or admit defeat. While the Michael Caine impersonation never makes an appearance, we do get dueling Mick Jaggers and Dustin Hoffmans, as well as moments for Werner Herzog, Ray Winstone, and Barry Gibb/Bee Gees (with “Grease” and “Staying Alive”).

Stunning scenery and historic locations provide ammo for some of the banter between the two comics, including whether Alexander the Great was an original gangster. However, there is also an underlying message here. The two argue over who should wear the respective masks of comedy and tragedy while they are on the hallowed grounds of an ancient Greek Theatre, and Coogan makes the point that “Originality is overrated. Everything is derivative.” This commentary applies not just to their own “Trip” franchise, but also to many other elements of society.

Perhaps there are a few too many aerial shots of their Range Rover traveling down a road, but the back country is so beautiful, we can’t complain. The same goes for those restaurants. Sure it’s torture to watch as they enjoy delicious food, but the scenery is unique to their locale. As we wonder when, or even if, we will ever be able to travel the globe again, perhaps the best lesson here is to value our time with friends and loved ones. A personal crisis is used for this series finale, though it also leaves us with the proclamation that that these trips have been “Mostly fun and games.” So, “already enjoy.”

Available on Digital Platforms and VOD May 22, 2020 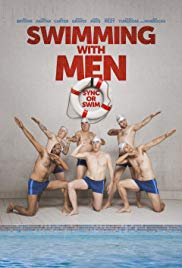 Greetings again from the darkness. If you are surprised to find a movie about an all-men’s middle-aged synchronized swim team, then you’ll likely be shocked to learn that another film on the same topic, LE GRAND BAIN (Sink or Swim), was released earlier this year, and these follow up a 2010 documentary MEN WHO SWIM covering the Swedish Men’s synchronized swim team. That’s right … three films! It is with great pleasure that I report director Olive Parker and writer Aschlin Ditta have delivered a charming and heartfelt movie that is really quite enjoyable, and more nuanced than you might pre-judge it to be.

Rob Brydon (THE TRIP) stars as Eric, a successful accountant going through a mid-life crisis that negatively affects his work, his marriage to Heather (a terrific Jane Horrocks), and his relationship with his teenage son Billy (Spike White). Eric spends his office days in a foggy haze, waiting for 6:00 pm so he can hit the local pool for a few laps – his only time alone without thoughts of boredom. On one of these evening dips, he (and we) get quite a visual … 7 men in goggles and caps sitting on the pool floor in a coordinated manner.

Soon enough, thanks to his math and analytical skills, Eric is invited to join the swim club (first rule of swim club: Don’t talk about swim club!) consisting of team leader Luke (Rupert Graves), dentist Kurt (Adeel Akhtar), young scofflaw Tom (Thomas Turgoose), recent widower Ted (Jim Carter), former youth footballer Colin (Daniel Mays), the “new guy” (Ronan Daly), and “Silent Bob” (Chris Jepson). Rather than the island of misfit toys, it’s a group of slightly damaged men – each with their own story of why life isn’t so great at the moment. We learn about each right along with Eric, and easily see how he fits right in. This group alternates drowning their sorrows with a pint at the local pub with nearly drowning each other at the local pool … with only the best intentions, of course.

Once the lads learn there is a competition in Milan, they bring on local swim teacher Susan (a spunky Charlotte Riley, “Peaky Blinders”) to coach them towards respectability. Sure, we get a few clichés and the predictability of events is usually spot on; yet, there is a core to the story and to each of the men that brings a welcome depth. Their coordination in the water leads to their better balance on dry land (aka, everyday life).

This is far from traditional cinematic masculinity, and instead shows us the impact of friendship and purpose. The original reason for forming the team was to protest the meaningless of life – to find their purpose. This is accomplished through the brilliance of gentle British humor (think DANNY DECKCHAIR, THE FULL MONTY, EDDIE THE EAGLE), and the clumsiness of full-bodied men in a pool … accompanied by Tom Jones’ version of “It’s a Man’s, Man’s, Man’s World”.