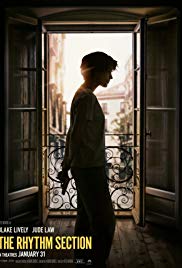 Greetings again from the darkness. Kicking off a successful franchise that can sustain multiple sequels is the dream of most actors, writers, directors, and producers. When it clicks, a movie franchise can be a cash cow for many years. Unfortunately, it’s just not that easy to create characters that viewers will invest in, or story lines that will keep those viewers interested. Author Mark Burnell has already published four books in his Stephanie Patrick series, and director Reed Morano brings the first one to the big screen. By the time the end credits roll, we have little doubt that “franchise” was the goal.

An opening scene finds Stephanie Patrick (Blake Lively) pointing a gun at the head of a man who is unaware of her presence. A freeze frame shifts us to “8 months earlier.” Stephanie is a mess. She is supporting her heroin addiction through prostitution, all with the objective of numbing her pain. Three years earlier, her family was killed in a plane crash. It’s the kind of tragedy followed by a grief so devastating that Stephanie has basically given up on life.

Stephanie is jolted back to life when a journalist informs her that it was a bomb planted by a terrorist that brought down the plane her family was on. Now, Stephanie has a reason to exist … revenge. Clearly some suspension of disbelief is in order here. Actually everything about this story is a stretch from reality or even believability. Quick, name all of the heroin addicts who become world class assassins in 8 months. OK, that’s probably not a fair question since you likely don’t know many heroin addicts, and you hopefully don’t know many assassins. But you get the point.

The film plays like a brochure for a travel agent, as the story and Stephanie have stops in Tangier, England, Ireland, Madrid, New York, and Marseilles. Each stop is pretty brief – merely long enough for some killing. Of course most of the stops occur after former MI6 agent Ian Boyd (Jude Law) trains her on the finer points of being a contract killer. The training includes jogging uphill, a frigid lake swim, how to fight in the kitchen, how to get run off the road while driving, and the invaluable advice to shoot your victim twice (but your teacher only once). Oh yes, and she has to impersonate a presumed-dead assassin. Fortunately, Stephanie was top of her class at Oxford, so she is smart enough to make sense of all these things that make no sense to us.

And another thing … why do all these people have such perfect and complete files on their targets?  Photographs by Glamour Shots, map coordinates to hideouts, and an alphabetical list of known accomplices are all quite helpful when former MI6 and former CIA agents (Sterling K Brown) are trying to get a heroin addict to do their dirty work. Brown’s CIA agent turned ‘information broker’ is the oddest of many odd characters here. He lives in a stunning ultra-modern home and has no qualms about hitting on hot assassins that he knows only by reputation. Thanks to all those marvelously complete files, the only unknown here is the mysterious U17. Well, U17 seems to be mysterious to everyone except those watching the movie.

Blake Lively is a talented actress as evidenced by her work in THE TOWN, THE SHALLOWS, and A SIMPLE FAVOR. She is simply miscast here. Despite the “training” her Stephanie received from Ian, we never once believe she is ready to kill all the bad guys. This contributes heavily to the lack of believability presented by the film. It’s a serious story that is ultimately impossible to take seriously as a viewer.

There is a difference in believable and stylish, and director Reed Morano certainly serves up style. She is known mostly for her work as a cinematographer, though she did direct the first 3 episodes of “The Handmaid’s Tale.” Ms. Morano and cinematographer Sean Bobbitt hit us with some jarring camera work, and the musical inserts are just a tad too cutesy and obvious at their given time: “I’m Sorry”, “It’s Now or Never”, and “Where Did You Sleep Last Night?” (a cover by Sleigh Bells).

Having author Mark Burnell adapt his own novel may have been a mistake, as there are far too many plot holes and ridiculous moments for this to work as any type of thriller. Here are three examples: we never know why Stephanie didn’t get on the flight with her family; it makes little sense that the journalist tracked her down; and is that supposed to be a twist or not? Given the inclusion of Bond producers (and half-siblings) Barbara Broccoli and Michael G Wilson (stepson of Cubby Broccoli), we can safely assume that the vision was to turn Mr. Burnell’s books into a franchise along the lines of James Bond and Jason Bourne – right down to the fight scenes and international settings. This film certainly sets things up for round two, and if that happens, let’s hope more attention is paid to the script … a crucial element if viewers are expected to buy in.