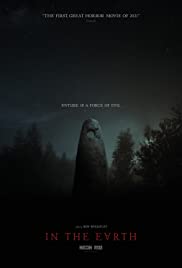 Greetings again from the darkness. Have you ever wondered why they warned concert attendees to stay away from the brown acid at Woodstock? I can only speculate, but I assume the poor souls who consumed the taboo drug experienced hallucinations not dissimilar to watching this latest from writer-director Ben Wheatley. Filmmaker Wheatley previously delivered such interesting and diverse fare as the intriguing horror film KILL LIST (2011), the confusing and bizarre HIGH-RISE (2015), and my personal favorite of his, the quite funny and action-packed FREE FIRE (2016).

Martin Lowery (Joel Fry, YESTERDAY, 2019) is sent to track down a doctor whose research may provide desperately needed help in fighting a virus that has wreaked havoc on the human race. Martin himself has been in isolation for four months prior to this mission. He teams up with Alma (Ellora Torchia, MIDSOMMAR, 2019), a Park Ranger who works out of a Lodge that has been closed for a year due to the pandemic. She will act as his guide on the 2 day hike through the dense forest to find the doctor.

As you would expect, the hike doesn’t go smoothly, and things turn very weird and dangerous when Martin and Alma cross paths with Zach (Reece Shearsmith, HIGH-RISE, 2015). He’s the ex-husband of Dr. Wendle, the one Martin and Alma are in search of. However, Zach is off the grid and off his (proverbial) rocker. He converses with the forest, which might possibly be his most normal action.

Dr. Olivia Wendle (Hayley Squires, I, DANIEL BLAKE) is finally located, and though she and Martin know each other, she seems quite intent on finishing her research in the forest. Back at the Lodge, Alma had filled Martin in on a local folk tale … the Spirit of the Woods, named Parnag. Most just call it, “the thing in the woods.” Are we to believe nature is evil, or is nature just fighting back against humans?

Written by Wheatley last year, the film shows the effects of a pandemic on some people and how trying to solve things through science may fall short. Paranoia, distrust, dread, and isolation from others are all at play here – and quite in line with our current state. A supernatural element hovers, but the psychedelic images keep us disoriented, and seem to exist for the sole purpose of visual effects. The strobes are so strong they could trigger responses from sensitive viewers, and if they don’t, the gore likely will. Cinematographer Nick Gillespie and composer Clint Mansell are standouts here, and though Wheatley is to be commended for his quick work, the film didn’t really click for me. Perhaps the two best comparisons are THE HAPPENING (2008) and the far superior ANNIHILATION (2018).