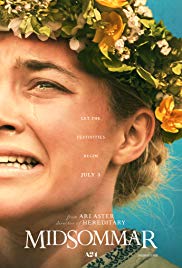 Greetings again from the darkness. Summer movies are traditionally tentpoles and teen flicks … big budget action movies and those aimed at an audience that are on a 3 month reprieve from school. We are quickly learning that rising star filmmaker Ari Aster cares little for tradition. Well at least he seems to thrive on twisting tradition and spinning off in an unusual direction. His feature film debut was last year’s mega-hit HEREDITARY, a horror film which was noted in most every critics association Top 10 list for 2018.

HEREDITARY was filled with darkness and dread, and Mr. Aster’s second film begins with a similar setting: it’s a dark and cold night as Dani (Florence Pugh, LADY MACBETH) frantically searches for her bi-polar sister through emails and phone calls. During her search, we realize that her relationship with boyfriend Christian (Jack Reynor, SING STREET) is a bit strained. The brilliant pre-credit sequence results in a horrific tragedy striking Dani’s family. Christian does his best to offer support, but he’s a typically weasel of a man who feels more at ease hanging out with his grad school buddies than providing love and compassion to his needy girlfriend … and he’s not man enough to tell her, despite the urging of his friends.

An awkward group conversation leads Dani to accept an invitation to go on the boys’ trip to Sweden. The purpose of the trip is twofold: to participate in a 9 day long village festival held every 90 years and for Josh (William Jackson Harper, “The Good Place”) to work on his thesis. The other guys in the group are Pelle (Vilhelm Blomgren) whose family in Sweden is hosting the festival, and Mark (Will Poulter, THE REVENANT) who provides much of the comic relief thanks to his overall cluelessness about pretty much everything related to graceful societal interactions.

And with that set-up comes one of the most deranged, unsettling and bizarre movie experiences this year (or most any year) is likely to bring. Try to picture a Folk Horror Comedy Fairy Tale Break-up Pagan Cult film, which at any given time reminds of MOTHER!, THE WICKER MAN, THE WIZARD OF OZ, THE VILLAGE, SUSPIRIA, and a handful of other cinematic oddities we’ve seen over the years. It is quite likely the sunniest horror film you’ve ever seen. And that’s a literal description … like the production could have been solar-powered. Most of it is filmed outside during Sweden’s Midnight Sun – constant sunshine accompanied by mostly bright white skin and even brighter white cotton costumes (embroidered as if meant for Woodstock). The daylight messes with your senses and expectations. Bad things are supposed to happen in the dark, not in broad daylight enveloped by picturesque wonders of nature. Although the opening is cold, dark and punctuated with tragedy, the rest is so bright, it almost blinds you to the atrocities on screen.

So without giving away anything, here’s what we are in for: a welcome to Sweden mushroom trip, a Waco joke, a caged bear, a sacred tree, a Powerball game you hope to lose, and flowers and trees that seem to breathe. We also are reminded not to forget the birthday of our significant other, living to age 72 is not really rewarded in this commune, and no one should ever dance till they drop – even to be named the Queen of May. Of course, as with most horror films, it’s easy to sit back as viewers and question the decision-making of the characters, but it’s not like they realize they are in a horror film … at least not until it’s too late!

Ms. Pugh (who reminds of another talented young actress, Haley Lu Richardson) is terrific here. Her character experiences shock, personal grief, a strained relationship, hallucinations, and a shot at revenge. The excellent music from Bobby Krlic, better known as The Haxan Cloak, is a mix of compositions and songs that create the mood for each character and scene. I was so shell-shocked at the end, that I’m unable to confirm that the version of “The Sun Ain’t Gonna Shine (Anymore)” is that of The Walker Brothers (Scott Walker died earlier this year) or that of another band. Director Aster’s second film proves the exaggerated and diverse spectrum of what constitutes a horror film, and cinematographer Pawel Pogorzelski’s disorienting camera work perfectly complements a rare cinematic blend of frightening and funny. The cheery faces and pastoral beauty very nearly distract us from what might be the ugliest break-up movie ever.