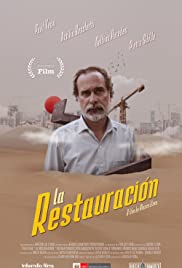 Greetings again from the darkness. We don’t typically look to Peru for observant black comedy filmmaking; however this first feature film from writer-director Alonso Llosa (story co-written with Gustavo Rosa) is one of those pleasant surprises we usually only get from film festivals or a spontaneous streaming selection. It’s yet another reminder that an entertaining film doesn’t require a massive budget or a mega-movie star. A terrific story with relatable characters and heartfelt performances will do just fine.

Shots of Lima’s towering and shiny new skyscrapers open the film as we hear from the narrator who describes the booming economy, as well as Peru being “a country of builders that peaked during the Inca period”. That narrator is Tato Basile (played by Paul Vega), a 50-ish failure at life. He dropped out of school which kept him from pursuing his preferred career as an architect. His marriage didn’t last. He has no job, lives with his mother, is addicted to cocaine, and claims he is ‘psychologically incapable of working”. His mother Rosa (Attilia Boschetti) is bedridden and near death, and is fairly disgusted with her grown man son who should have figured out life by now. Still, she grudgingly gives him money for his habit. Her long-time trusted housekeeper and personal assistant Gloria (Delfina Peredes) has protected Rosa from the fact that the family funds are nearly depleted … and the once glorious mansion is crumbling.

One day Tato runs into old friend Raymond (Pietro Sabille), who is now a real estate tycoon cashing in on Lima’s boom market. Their conversation leads Tato to concoct an ingenious and devious plan that requires the assistance of Gloria, as well as Eladio (Luis Fernando Ananos Raygada), the family friend-gardener-handyman-driver, and Inez (Muki Sabogal), Rosa’s young caregiver. The idea is to sell the family house to Raymond for top dollar, and to keep the transaction a secret from Rosa by telling her the family home is being renovated. To pull this off, the co-conspirators will re-create her bedroom in a remote location, and pipe in construction noise and the familiar aroma of the neighbor’s stew. Of course the plan is ludicrous, but desperation for money often leads to poor decisions.

Llosa includes humorous moments and memorable characters, in addition to the life lessons that Tato learns about 3 decades later than he should. Rosa has a recurring acute punchline about disliking “social climbers”, and the score has a 1980’s “Miami Vice” vibe that complements the retro look and feel of the film (including the credits). Llosa’s film is sweet, funny, and sad, and is an example of excellent story-telling. Mr. Vega perfectly captures adult Tato as he finds the soul and love that he’s been lacking. This one might take some effort to track down, but you’ll likely find it worthwhile and entertaining. I sure did.