Greetings again from the darkness. Each year provides us with (at least) a few hidden gems sprinkled amongst the superheroes and newfangled special effects displays, and although this feature film debut from filmmaker Cory Finley is only now hitting theatres, it seems safe to say it likely won’t draw the size audience it deserves. If you enjoy dark, twisted, and devilishly clever films, you owe it to yourself to track down this one.

Olivia Cooke (ME AND EARLY AND THE DYING GIRL) stars as Amanda, someone who walks a miniscule line between neurotic and psychopath. The startling and quite ominous opening features Amanda, a horse, and a large knife. Next, and some time later, we see Amanda re-connecting with her childhood friend and boarding school brainiac Lily (Anya Taylor-Joy, SPLIT and THE WITCH) in what appears to be a tutoring session being held in the palatial estate where Lily lives with her mother and “evil” stepdad Mark (Paul Sparks).

What follows is the mind-bending, winding-road of us attempting to fit either or both of these characters into some “normal” category of human behavior. Instead, what lies beneath is slowly unsheathed. As Amanda and Lily interact, we especially come to realize that Amanda is drawing out what’s behind the proper front that Lily wears on a daily basis. A plot to murder the stepdad is developed, and caught in the wicked web is Anton Yelchin as Tim, a dreamer and schemer who quickly realizes the trouble these two bring. This was one of the last roles Yelchin filmed before his tragic death. His brief time on screen here reminds us of his immense talent.

An atmosphere of dread and pending doom hovers over most every scene, yet somehow it’s simultaneously funny and disturbing. We find ourselves asking if it’s OK to laugh at some of the exchanges. As Amanda explains she’s “not a bad person”, the line makes us chuckle, while also making us realize she actually believes it and we shouldn’t! As she teaches her tutor Lily “the technique”, we become convinced the line has been crossed into psychopathy.

Suburban Connecticut and its corresponding privileged life has rarely generated more queasy feelings, and with our hope for humanity in the balance, we watch Amanda and Lily bounce from plotting to problem solving and from conspiring to collaborating. The absence of empathy goes beyond disconcerting and into a feeling of resolved fear. The lack of emotions and empathy can be more frightening than vampires or fictional monsters.

Cinematographer Lyle Vincent does nice work displaying this world, and he will always deserve a mention after his sterling work on 2014’s A GIRL WALKS HOME ALONE AT NIGHT. The dark, twisted work is well accompanied by the abrupt and jarring music, and filmmaker Finley deserves recognition for crafting this creepy corner of a universe none of us want to join. His film is in the vein of something Yorgos Lanthimos (THE LOBSTER) might deliver, and that’s quite high praise for oddity … in fact, Odin Impetus Lowe even gets a screen credit, and he’s the opening scene horse! 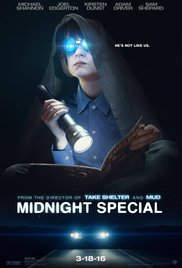 Greetings again from the darkness. Writer/director Jeff Nichols’ follow-up to his very strong Take Shelter is a grounded, rustic look at what it means to become a man. While that may be enough, it also works as a chase movie, a buddy movie, a family drama, and a look at small town dynamics … all seen through the eyes of 14 year old Ellis (Tye Sheridan from The Tree of Life).

Matthew McConaughey stars as Mud, a drifter who quickly captures the fascination of Ellis and his earnest buddy Neckbone (newcomer Jacob Lofland) as their worlds collide under a boat in a tree just off the Mississippi River in rural Arkansas. Turns out Mud is a bit of a smooth-talking philosopher who wins Ellis over spinning life yarns that come just as Ellis’ parents (Ray McKinnon from O’ Brother, Where Art Thou?, and Sarah Paulson from Martha Marcy May Marlene) are hitting a rough patch and he is trying to figure out just how the female species fits into the whole big picture. Mud lays out a beautiful story

of how he killed a man protecting his true love Juniper (Reese Witherspoon). Now Mud is being chased by the man’s family (brother Carver played by Paul Sparks, and father King played by the too-rarely seen Joe Don Baker – looking great at age 77).

Michael Shannon has a few scenes as Neckbone’s Uncle who makes a living by diving for mussels in the river. You might remember how terrific Shannon was in Nichols’ Take Shelter, and he has become quite an interesting and dependable character actor in various projects. Even more impressive is Sam Shepard as Tom Blankenship … the father figure for Mud, and a quiet

river guy with quite a colorful past. Shepherd’s first scene with Ellis is brilliant and could generate a campaign for Best Supporting Actor if this film can reach a wide enough audience.

The story is filled with numerous little realistic touches and it’s so original that there is no perfect comparison … though it does have some of the feel of Stand By Me, which is quite a compliment. It is difficult to remember another film where Beanie Weenies were such a valued prop, or where a boat in a tree became a negotiating point, or where the unhurried pace led to such tension. Tye Sheridan delivers a strong and rare performance for such a youngster, and McConaughey deserves special mention because he has clearly broken free of his early career Him-Bo roles, and can now be considered a legitimate actor. He is simply outstanding in the role of Mud. We sense the danger that follows him, but are enchanted with his connection to the boys. David Wingo’s score is the perfect cap for this little gem.

SEE THIS MOVIE IF: you enjoy quiet little indies that pack a whallop OR you want to see excellent work from a great cast

SKIP THIS MOVIE IF: deliberate pacing and sparse dialogue taking place in a quiet rural community equates to nap time for you