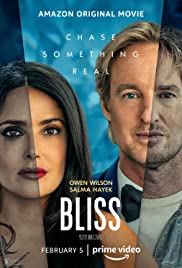 Greetings again from the darkness. We each have a vision of what our ideal world would look like. When we first meet Greg (Owen Wilson), he’s working on multiple sketches of his: a picturesque Mediterranean villa and a beautiful woman to share it with. Greg seems to be escaping from a world that isn’t so great. He’s recently divorced, estranged from his son, and evades his daughter’s attempt at reconciliation. He’s also taking some type of prescription drug that he’s clearly abused. On top of all that, Greg is supposed to be working his office job for a customer service company aptly named, “Technical Difficulties”. The phone bank of employees are trained to answer each call with, “I’m sorry”. At this early point, we aren’t certain if this is a parody of office life or the set up for something else. Our uncertainty remains even after Greg has a disastrous private meeting with his boss.

Things really get bizarre when Greg bolts from the office and into the local bar across the street. It’s here where he first encounters Isabel (Salma Hayek dressed like a witch), who introduces him to the idea that this world isn’t real. None of it … except him. She has created a computer simulation of life and there are two pills/crystals for escape (this should sound familiar to fans of THE MATRIX). The yellow one allows Greg and Isabel to bend the laws of physics, while the blue one jolts them to the world that magically matches Greg’s sketches. Like anyone with newly found superpowers, they head to the local roller rink, and take turns causing other skaters to fall until everyone else lay unconscious on the wooden floor. It’s at about this point where I’m fighting the urge to give up on the movie.

Writer-director Mike Cahill was behind two previous excellent movies that questioned our realties: ANOTHER EARTH (2011) and I ORIGINS (2014). However, this time out his approach is muddled and unstructured. It plays like a philosophical science fiction-romance, but we spend much of the movie trying to determine if the movie is too bizarre or not bizarre enough. A successful complex story will push us to buckle down and engage, but this one never allows us to connect with the characters, so we lose interest. It purposefully tries to trick us into choosing whether it’s a computer simulation, parallel universes, or making a statement on severe mental illness. We don’t have an answer until the end … which would be fine were the journey more enticing.

Asteroid mining, synthetic biology, and Isabel’s “Brain Box”, are given some credence thanks to cameos from Bill Nye (the Science Guy) and Slovenian philosopher Slavoj Zizek. Ms. Hayek and Mr. Wilson, both former Oscar nominees, have little chemistry between them, and the film’s best performance, albeit with limited screen time, comes from Nesta Cooper as Greg’s daughter. By the end, we realize this was a convoluted story line for what was really a pretty simple explanation, and somehow we feel a bit cheated with the whole thing.