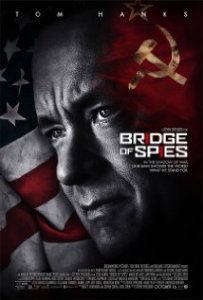 Greetings again from the darkness. For a director, true power in the movie industry means you can obtain the financing and assemble the cast and crew you need to make the films that have meaning to you. With his 40 year career of unmatched combined box office and critical success, Steven Spielberg is the epitome of film power and the master of bringing us dramatized versions of historical characters and events. In his fourth collaboration with Tom Hanks, Spielberg tells the story of James B Donovan.

You say you aren’t familiar with Mr. Donovan? In the late 1950’s and early 1960’s, the CIA (Allen Dulles was director at the time) persuaded James Donovan to provide a bit of Cold War legal service. Mr. Donovan was by trade an Insurance attorney, but after others in his profession passed on the “opportunity”, his commitment to justice and human rights drove him to accept the challenge of defending suspected Russian spy named Rudolph Abel. In the face of an angry populace and government, Donovan took the case all the way to the Supreme Court – and his exact words are spoken in the movie by Hanks.

Not long after, Francis Powers (played by Austin Stowell) was piloting a CIA U-2 spy plane when he was shot down over Russia and taken captive. This sequence in the film is breathtaking to watch. Enter James Donovan again … this time to negotiate an exchange of prisoners: Rudolph Abel for Francis Powers. It’s these negotiations that provide the element of suspense in the story. Mr. Donovan was a family man, but he was also very confident in his ability to negotiate on the biggest stage and under the brightest spotlight (or darkest backroom).

The movie is exactly what you would expect from a master filmmaker. Spielberg slickly re-creates the era through sets, locations, and costumes. He utilizes his remarkable eye behind the camera, an interesting use of lighting, and the score from Thomas Newman. Nope, that’s not a misprint. It’s the first Spielberg movie in 30 years not scored by John Williams (who was unable to work on the project). Of course, the cast is stellar and it all starts with Tom Hanks. He just makes everything look so darn easy! Whether he is talking to his wife (Amy Ryan), his kids (including Bono’s daughter Eve Hewson), his law partner (Alan Alda), or agents from the U.S. or Russia … Hanks manages to make each scene real and believable.

It’s the scenes between Donovan and Rudolph Abel that are the most fascinating to watch. Mark Rylance plays Abel, and to see these two men grow to respect each other for “doing their job” is a true acting and screenwriting clinic. We find ourselves anxious for the next Rudolph Abel scene during an extended span where the focus is on Donovan’s negotiations. When the two finally reunite, it’s a quietly affecting moment where much is said with few words.

Spielberg utilized many of the locations where the actual events took place, and this includes Berlin and the Glienicke Bridge where the real exchange took place in 1962. While missing the labyrinth of twists and turns of Tinker Tailor Soldier Spy, it’s knowing that these are real people in real situations that make this historic drama so thrilling and riveting to watch.  Film lovers will also get a kick out of the fact that the script was co-written by the Coen Brothers, and history lovers will enjoy seeing some of the details provided by the written words of those involved, as well as their surviving family members. It’s an era that seems so long ago, yet the topics are so pertinent to what’s happening in the world today.  Beyond all of that, it’s a story of a man standing up for what’s right at a time when that was not the easy or popular way.