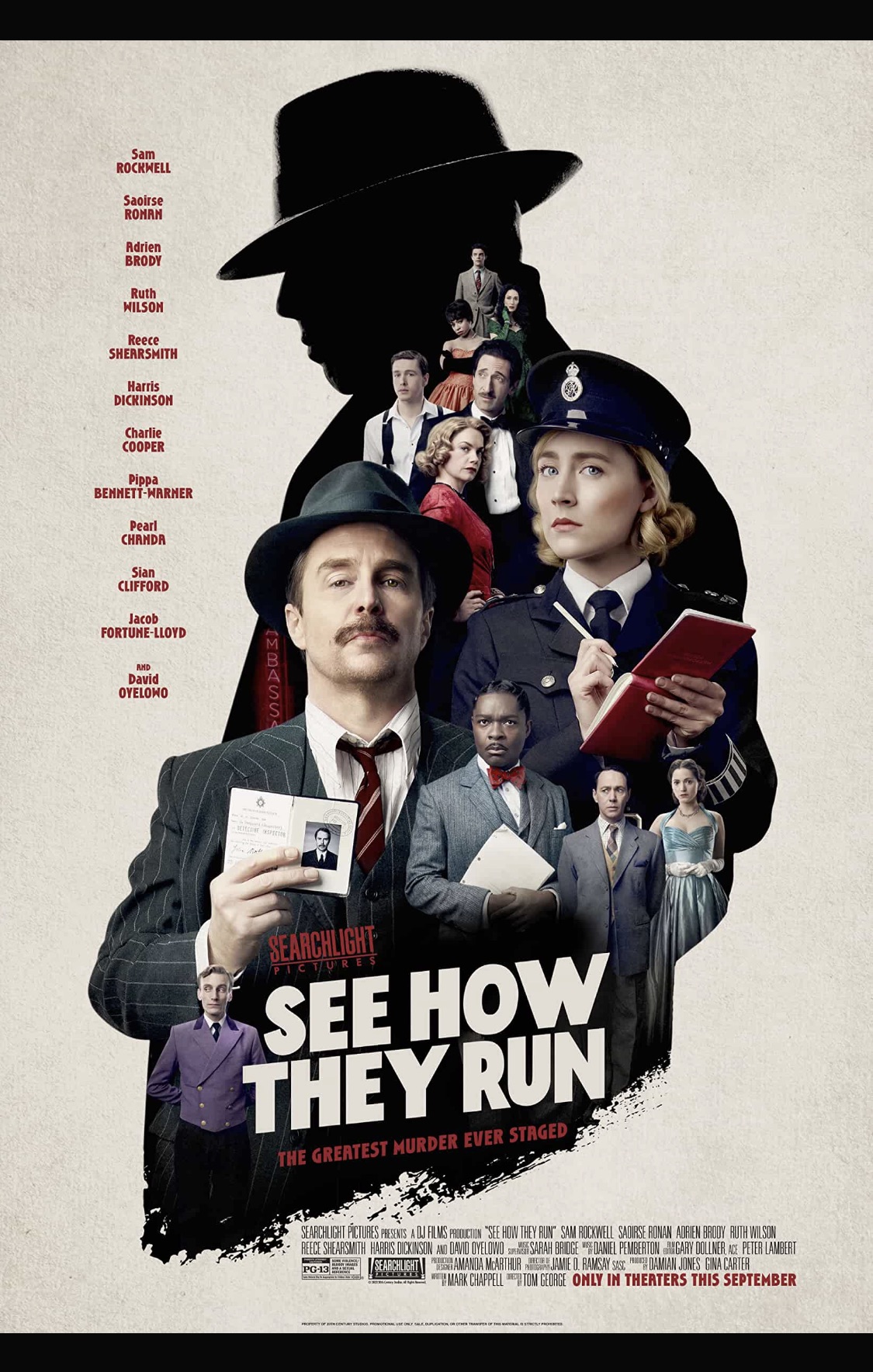 Greetings again from the darkness. It’s 1953 in London’s West End and the cast of “The Mousetrap” is celebrating its 100th performance. Of course, Agatha Christie’s play with the twist ending would go on to be the all-time longest running show in the West End, interrupted only by COVID restrictions in 2020. This is the first feature from director Tom George, and the screenplay by Mark Chappell involves a murder mystery wrapped around the murder mystery play.

Harris Dickinson plays the Dickie Attenborough, the original Detective Sergeant Trotter … and yes, that’s the same Richard Attenborough who played the likable John Hammond, the developer who “spared no expense” in creating Jurassic Park. So while Dickinson plays the detective on stage, it’s Oscar winner Sam Rockwell who plays Inspector Stoppard … the London detective assigned to solve the real murder of Leo Kopernick (Oscar winner Adrien Brody), which occurred in the theater during the cast party. Kopernick, an abrasive American director, was in talks to create a film version of the play.

Assisting Stoppard with the investigation is rookie Constable Stalker (Saoirse Ronan), who writes every detail in her notepad, and is overly quick to name the killer in her eagerness to solve the case. Rockwell chooses a laconic, prosaic approach for his Inspector Stoppard to contrast mightily with Ronan’s overzealous Constable Stalker. We are treated to two terrific actors playing off each other. Unfortunately, the screenplay and overall movie simply doesn’t deserve these two … or the balance of the talented cast which includes Ruth Wilson, an unusually flamboyant David Oyelowo, and the always great (and criminally underappreciated) Shirley Henderson.

With the recent success and popularity of Rian Johnson’s KNIVES OUT (2019), it’s perfectly understandable why producers and movie studios would want to capitalize on the newly discovered beauty of whodunnits, but there is a distinct line drawn between effective murder mysteries (whether dramatic or comedic) and those that offer no real punch or tension. The theater makes a grand setting, and the well-choreographed hallway scene provides a dash of fun, but overall this one is just too flat to recommend.