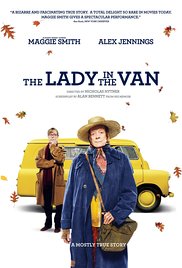 Greetings again from the darkness. “There’s air freshener behind the Virgin”. That line should provide the necessary caution for you to be braced for just about anything to be said by any character in this latest from director Nicholas Hytner.  Billed as “A mostly true story”, it’s actually more commentary on how we treat those less fortunate and how we use others for our own gain. That bleak message is cloaked here in humor and a wonderful performance from Dame Maggie Smith.

Alan Bennett is an author, playwright and screenwriter known for The History Boys and The Madness of King George (Oscar nominated for his script). He is also at the core of this story – every bit as much as Ms. Shepherd, the lady in the van. While living in upper crust Camden Town, Mr. Bennett offered to let Ms. Shepherd park her van in his driveway for a few weeks until she could make other arrangements. This van was also her home, and the years (as they are apt to do) came and went until this arrangement had lasted 15 years (1974-1989).

You might assume that Ms. Shepherd was an extremely appreciative “squatter”, but in fact, she was quite a cantankerous and difficult woman, possibly/probably suffering from mental instability. Maggie Smith brings a humanity to the role that she had previously owned onstage and radio. She goes far deeper than the wise-cracking old lady role we have grown accustomed to seeing her play … though her vicious dialogue delivery remains in prime form. Throughout the film, we assemble bits and pieces of Ms. Shepherd’s background: an educated-French speaking musician-turned nun-former ambulance driver-who “possibly” won awards for her talents. She is also carrying a burden of guilt from a past tragic accident that keeps her in the confessional on a consistent basis.

Mr. Bennett is played by Alex Jennings (The Queen, 2006), and the film actually presents dual Bennetts – the one doing the writing, and the one doing the living. These two Bennetts are a virtual married couple – arguing over Ms. Shepherd, and jabbing each other with barbs aimed directly at known emotional weaknesses. The living Bennett claims to be so full of British timidity that he couldn’t possibly confront the woman junking up his driveway. The writer Bennett takes the high road and claims he would rather write spy stories than focus his pen on the odorous, obnoxious transient living in his front yard. Of course, now that we have a play and movie, it’s difficult to avoid viewing Mr. Bennett’s actions as anything less than inspiration for his writing … though the extended charitable actions cannot be minimized.

Filmed at the same house where the van was parked for so many years, the film is a reminder to us to exercise tolerance and charity in dealing with the poor. Even Bennett’s grudgingly-offered assistance is a step above what would typically be expected. While we could feel a wide spectrum of emotions for the two main parties here, it’s Ms. Shepherd’s character who says “I didn’t choose. I was chosen”. We are left to interpret her words in a way that is either quite sad or accepting.

The film mostly avoids dime store sentimentality, and that’s in large part due to Maggie Smith’s performance. Few are as effective at frightening young kids or putting the elite in their place. The ending scene shows the real Alan Bennett cruising into the driveway on his bicycle just as the blue plaque honoring the lady in the van is displayed. We can be certain this gesture would not generate a “thank you” from her.

Greetings again from the darkness. It’s been about 4 years since the delightful first film, based on Deborah Moggach’s novel, was a box office hit. My review of that film was the first time I used the phrase “gray cinema” – describing a growing genre specifically targeting the aging population. Neither director John Madden nor writer Ol Parker have had much going on since, and they re-team for this sequel that should satisfy most of the sure-to-return core audience.

Spirited and energetic hotelier Sonny (Dev Patel) is back and has his sights set on expansion to a nearby second property. Most of the original residents are also back: Judi Dench, Maggie Smith, Bill Nighy, Celia Imrie, Ronald Pickup, and Diana Hardcastle. Lilette Dubey returns as Sonny’s mother, Tina Desai is now his fiancé, and Penelope Wilton resurfaces after dumping Bill Nighy in the first movie. New faces to the scene include Richard Gere, Tamsin Greig and David Strathairn, along with a few other lesser, but effective supporting roles.

A similar extended pre-opening credit sequence is again utilized to catch us up on the status of the regulars. Maggie Smith is now co-managing the hotel. Judi Dench is a buyer of local fabrics. Bill Nighy is a willing, but inept tour guide. Celie Imrie is juggling two wealthy suitors. Ronald Pickup and Diana Hardcastle are working – at jobs and at a relationship. Mr Patel and Ms Smith take a business meeting to the U.S. to meet with Mr. Strathairn with a design on financing the second property. Mostly the trip is an excuse for Dame Maggie to crack wise about us uncultured Americans, and few can deliver a one-liner like this lady.

It’s also on this trip, where Patel’s character begins a change in tone. In the first movie, his character was eager, naïve, pleasant and charming. This time, his ambitious nature is over-the-top and actually quite annoying (by design yes, but still annoying). This single feature affects the pleasant nature and unnecessarily puts us on edge and prevents us from connecting with a key character.

What’s very clear is that this film misses the structure of Ms. Moggach’s novel, and the numerous sub-stories come at us so quickly that every character is mostly surface level with no real depth allowed. The best exchanges are between Ms Dench and Ms Smith (one being 19 days older than the other), while poor Mr Nighy is treated like a wounded puppy for much of the story. Also lacking is the cultural clash so prevalent in the first, and instead we witness a group that has acclimated to the surroundings preventing any real interesting conflict – though the colorful sights of town are still amazing to see. The “high-speed” tuk-tuk chase adds an element of humor, and of course we get the Bollywood-style dance number at the end of Sonny’s wedding to Sunaina (Tina Desai).

Despite the flaws, there are still plenty of laughs and loads of charm, and it’s certainly a pleasure to see a welcome response to the question “Is age a barrier to happiness?”. The actors and the setting make this an enjoyable two hours, though some may question the attempt at a deeper philosophical approach at the end.

Greetings again from the darkness. The latest entry into the gray cinema genre is also the directorial debut of Dustin Hoffman. Oddly, Mr. Hoffman chose a British play for his first film. Ronald Harwood adapted his own play for the big screen and it certainly benefits from some giants in the acting world.

Beechum House is a retirement home for retired musicians and performers. It’s a beautiful home with a stunning property ideal for long nature walks, croquet or simply taking tea on the patio. Many details of the movie probably worked better on stage, but Tom Courtenay, Billy Connolly, Maggie Smith and Pauline Collins are wonderful as renowned singers famous for their rendition of Verdi’s “Rigoletto”.

In a convoluted plot mechanism, Beechum House needs a cash infusion to keep its doors open, and the answer comes from a hoped for reunion of the above mentioned quartet in this year’s fundraising gala. Convoluted seems like the right word because, of course, the house gets “saved”, but there can’t be more than 50 people in the audience … some of which are the students Mr. Courtenay teaches in his music class.  It seems doubtful this crowd would have generated enough money to save the house from financial ruin.

Anyway, this isn’t meant to be an in-depth character study. It’s just a simple, sentimental, and even sweet story of some aging,

talented performers who are struggling with the pains and insecurities of old age. Michael Gambon wonderfully captures the pomposity of a once-great director who still thrives on what little power can be grasped at Beechum House.

This one is not near the level of last year’s The Best Exotic Marigold Hotel, though it’s enjoyable enough for light-hearted and well-meaning entertainment. The gala also features a wonderful aria performed by famed opera singer Gwyneth Jones. Take this one for what it is … a pleasant movie experience.

SEE THIS MOVIE IF: a pleasant, light-hearted movie with likable characters is what you are after

SKIP THIS MOVIE IF: you are seeking something with a bit more insight into the aging process

Greetings again from the darkness. The closest I can come to saying anything negative about the film is that it is a bit predictable, and I wish we had time to get to better explore these characters. That said, it is quite an entertaining ride to take with some of Britain’s finest actors. Filled with both comedy and insight, the Ol Parker script of the Deborah Moggach novel (“These Foolish Things”) may be the jump start to a new film genre … gray cinema.

In the pre-opening credit sequence, we get introductions to seven Brits who are all at a crossroads in life … each past the career stage (either voluntarily or otherwise) but not ready to disappear into a meaningless existence waiting to die. They each respond to an advertisement for a hotel in Jaipur, India which caters to the “elderly and beautiful”. Its biggest selling point is probably the low cost of retirement. Still, it’s an adventure of the

scale most of our heroes have never taken.

We meet Evelyn (Judi Dench) as the recent widow who discovers her beloved husband left her a mountain of debt; Douglas and Jean (Bill Nighy and Penelope Wilton) a hapless married couple who have invested their savings into their daughter’s internet company; Muriel (Maggie Smith) is a racist and longtime housekeeper for the rich who has been put out to pasture while in need of a new hip; Graham (Tom Wilkinson) is a high court judge who is fed up with responsibility and seeking to reconnect with a long ago lover; Madge (Celia Imrie) and Norman (Ronald Pickup) are the lonely hearts looking for love, or in his case, loving.

They arrive at the Indian resort to be met by its proprietor Sonny, a wildly exuberant and overly optimistic Dev Patel (Slumdog Millionaire). Sonny has inherited the rundown property from his father and has huge dreams of turning it into a showplace for retirees from abroad … he literally wants to outsource old age for all the countries who have no use for the elderly. A sad truth for both the English and Americans.

country and, in turn, more about themselves. Graham’s discovery is especially touching, while Jean’s takes a proverbial slap in the face from her long-suffering, quasi-henpecked husband Douglas. Even young Sonny learns about life decisions thanks to his guests and the actions of his mother and girlfriend.

With the general population aging, expect to see more films in this vein … aimed at the age group who is approaching the crossroads, but not yet ready to give up living. Director John Madden (Shakespeare in Love) has delivered a charming seriocomedy, but I expect others will take a more in-depth and analytical view at some point.

SEE THIS MOVIE IF: you are after an entertaining story about some very interesting characters

SKIP THIS MOVIE IF: you are looking for an in-depth study of the crossroads senior citizens face as their careers come to an end and a path must be chosen.