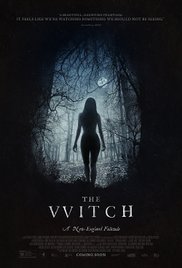 Greetings again from the darkness. If your own nightmares have become less frequent, and you find yourself able to sleep peacefully through the night, writer/director Robert Eggers’ first feature film will likely fix that. Based in 1630 New England … a full 60 years prior to the Salem witch trials … much of the story and dialogue is based on actual historical documents corresponding to the fears of that era. It would be a mistake to head into this one thinking it’s going to having you covering your eyes or springing from your seat … it’s better described as unsettling and disquieting.

Religious fanaticism plays a key role here, and is actually behind a Puritan family being exiled from the community. They set up a home and farm on the edge of an ominous, heavily-wooded forest … and things start to go wrong. William (Ralph Ineson) and Katherine (Kate Dickie) are stern and stoic parental units to coming-of-age teenager Thomasin (Anya Taylor-Joy), her younger brother Caleb (Harvey Scrimshaw), two spoiled and annoying twins Mercy (Ellie Granger) and Jonas (Lucas Dawson), and a new born named Samuel.

This is a slow-burn psychological horror film and it never relies on cheap jump-scares. Instead the eerie atmosphere, lurking Satanic evil, and unraveling of the family as they search for answers, all combine for a level of creep that’s not often seen on screen. Adding to our pre-conceived notion that things rarely end well for closed-mind religious zealots is the unsettling use of Old World English … it takes some time to adjust your ears.

Most of director Eggers’ background is in short films with an emphasis on Production Design and Costume Design. It’s interesting to note the gradual decline of lighting as the movie progresses … most notably on the opening and closing shots of daughter Thomasin, who faces the most backlash as a suspected (by her family) witch.

This was a time when people prayed for food and for God to have mercy … and to explain the unexplainable. No amount of praying can make sense of the titular witch (Bathsheba Garnett), or the family’s goat Black Phillip (voiced by Wahab Chaudhry), or an evil bunny that would make Monty Python proud. The dingo taking their baby might actually be a preferred explanation.

Eggers won the Sundance Award for a Director in Drama, and the film was nominated for a Grand Jury Prize. Mark Korven’s score is unique and the perfect complement to the onscreen happenings of this poor family. The film stays true to the time period, which of itself, feels like a parallel universe unfamiliar to most of us these days. Young actors Anya Taylor-Joy and Harvey Scrimshaw are real finds, and director Eggers will have a built-in and well-deserved audience for his next outing.