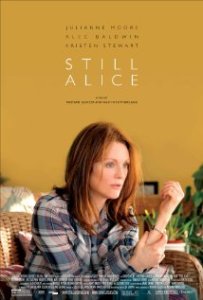 Greetings again from the darkness. I’ve never understood the phrase “cruel disease”. Are there diseases that aren’t cruel? One could say the level of cruelty is determined by how the disease affects you and your loved ones, but a stunning performance by Julianne Moore provides a glimpse of what Alzheimer’s does to those afflicted. She shows us what it’s like when we are robbed of what makes us who we are.  And yes, it’s very cruel.

Most “disease” movies spend a significant amount of effort demonstrating how this will affect the victim’s family and friends, but co-directors Richard Glazer and Wash Westmoreland have adapted Lisa Genova’s novel to focus on Alice (Ms. Moore) … her family is mostly trotted out to help the viewer understand how the disease has progressed. We first meet Alice on her 50th birthday, and soon learn she is a brilliant Linguistics Professor at Columbia and has 3 brilliant kids (Kristen Stewart, Kate Bosworth, Hunter Parrish) and a brilliant husband (Alec Baldwin). These are brilliant, successful and beautiful people. And that’s one of the points here … Alzheimer’s doesn’t pick on the poor, the slow or the weak. It doesn’t discriminate at all (other than a slightly higher rate amongst women).

Julianne Moore somehow is equally effective as the energetic, very confident professor and the shell of a person with vacant eyes who only periodically recognizes the face in the mirror or the faces at the family meal. This is a movie and a performance about moments … moments of panic, isolation, and one particular moment of unleashed emotion when Alice comes clean to her husband early on. We hear the fading of her verbal skills (in her speeches) and we witness the slow fail of her body (she was once a runner). It’s torturous to hear and see.

There have been other movies that touched on Alzheimer’s: The Notebook (2004), The Savages (2007), and Away From Her (2007), but Julianne Moore is the first to take us inside, to force us to feel the slow loss of self. It’s painful, and yes it’s cruel.

**NOTE: that is Julianne Moore’s son (with director Bart Freundlich) playing guitar on the park bench near the end of the movie

SKIP THIS MOVIE IF: you and your family have been touched by Alzheimer’s and you need no reminder

Greetings again from the darkness. If you have seen Sam Peckinpah‘s classic 1971 original with Dustin Hoffman and Susan George, it is impossible to watch this remake without comparing the two films. Because of that, these comments will include some comparative notes. After all, it’s been 40 years and most people watching this new version have never seen the original, though I highly recommend it.

Director Rod Lurie follows the Peckinpah version pretty closely with the obvious changes being a move from the English countryside to the deep south (Mississippi), and the main characters are now a screenwriter and actress instead of mathematical whiz and … well, whatever Susan George’s character was in the original. Those are the obvious changes, but not the most significant. I really missed the subtlety and psychological trickery delivered by Peckinpah, especially in the relationship between David and Amy.

Lurie chooses to take advantage of the physical screen presence of Alexander Skarsgard (“True Blood”) as Charlie, the local stud and Amy’s ex. Charlie’s past exploits on the football field and his creepy leadership skills with his posse of thugs, provide the yin of physical strength to the yang of David’s intelligence. It’s interesting to note that this version spells out Sun-Tzu’s description of “straw dogs” while Peckinpah left his audience to fend for themselves. But, of course, what the story boils down to is just how far can a civilized person be pushed … and how far is the bully willing to go?

James Woods is a welcome and terrifying addition to the new version. Since it is based in the small town south, high school football must play a role. Woods is the former high school coach who is now a violent drunk, and still leader of his former players. He is a sadistic type who picks on Jeremy Niles (Dominic Purcell), the slow-witted brother of Daniel (Walton Goggins) and constantly accuses him of inappropriate behavior with his 15 year old cheerleader daughter.

James Marsden (Hairspray) and Kate Bosworth (Remember the Titans) play David and Amy. They come back to Amy’s childhood home so she can rest and David can have some peace and quiet while writing his screenplay on the Battle of Stalingrad. Well, we couldn’t really have him writing a rom-com, could we? From Day One, the peace and quiet is clearly missing and Lynyrd Skynyrd wins out over Bach in the battle of radio volume. Tension builds and David is tested daily over what it means to be a man … tested by the local hicks and doubted by his lovely wife.

Things turn from bad to worse when the locals invite David to go hunting with them. What happens with Charlie and Amy during this time changes everything. This sequence was the key to the controversy of the original and what caused it to be banned in many cities and countries. Lurie chooses to handle it in a very straightforward manner – plus, times and mores have changed quite a bit in the last 40 years.

For me, the Peckinpah original remains a classic film with brilliant psychological undertones which left me feeling very uncomfortable and questioning what I might do in this situation. Lurie’s new version offered little of that but does work fine as a straightforward suspenseful thriller.

SEE THIS MOVIE IF: you would like to compare original vs. remake OR you want to see a very creative use of a bear trap OR you want a close up view up Kate Bosworth’s heterochromia (one brown eye and one blue)

SKIP THIS MOVIE IF: you are devotee to Peckinpah’s version OR you prefer your thrillers have little violence