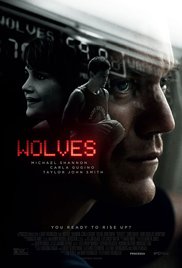 Greetings again from the darkness. Anthony is a good kid with a bright future. He’s a star basketball player and a bright student, and has a loyal girlfriend and seemingly normal home life. It comes as no surprise that most of those elements either aren’t as smooth as they seem, or are more complex than on the surface.

Writer/director Bart Freundlich (known for his 1997 debut feature The Myth of Fingerprints, and for being married to Julianne Moore) slowly unveils the cracks in Anthony’s (Taylor John Smith) façade. His college professor dad (the always great Michael Shannon) is a drunk, abusive man with a short fuse and severe gambling addiction. He’s the kind of guy who is always working on his great American novel, while juggling gambling debts and throwing down quiet jealousy of his son. His mother (Carla Gugino) has good intentions and clearly wants the best for her son, but she’s just not capable of standing up to the menace. It plays like a Maslow’s hierarchy of crappy parenting.

There are plenty of clichés that we’ve seen in many movies, but it’s a pleasure to see so much real basketball being played. Anthony has a sweet jump shot and a sweet girlfriend named Victoria (Zazie Beetz), and the interpersonal relationships all have nuances that come across as real life. Even Uncle Charlie (Chris Bauer) seems torn about which family member most needs his protection. Emotional-physical-financial strains abound and it all seems to crash down on Anthony as he strives to earn a college scholarship by impressing the coaches from Cornell.

As Anthony navigates the choppy waters towards independence, the film teases us with some sub-plots that could have been further explored. Anthony hits it off with an older, wiser street baller (John Douglas Thompson) who starts mentoring him. We also are given hope that Anthony’s mom will actually do something for her son rather than regretting what she hasn’t done. Lastly there is a quick tease as to an alternative past that would make some sense – though whether that’s real or imagined is left up to the viewer’s perspective.

The film ultimately plays like a Disney film that utilizes an inordinate number of “F-words”, and it even reminds a bit of the Paul Giamatti movie Win Win. It’s the acting and the periodic sequences of real emotion that allow us to remain interested in the characters right up until the end … even if our hopes differ from one of Anthony’s own parents.