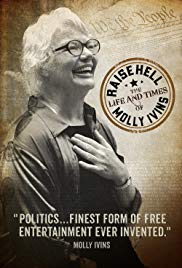 Greetings again from the darkness. We can’t help but be drawn to that rare breed who possess a perfect blend of intelligence, humor, wit, and communication skills (whether written or oral). These people tend to make us laugh while they educate us and motivate us to think. Documentarian Janice Engel delivers a fascinating look at a fascinating woman, Molly Ivins.

With a subject like Molly Ivins, there is no question the time spent watching this will be entertaining; however, Ms. Engel doesn’t miss an opportunity to dig a little deeper. Of course we see many archival clips of Molly delivering her own expertly chosen words – typically at the expense of some conservative politician, and we also are treated to personal insights from her siblings, as well as a couple of childhood/lifelong friends.

A traditional timeline is used for this anything-but-traditional woman. She stood 6 feet tall at age 12, and even as an adult she was a physically imposing presence in an occupation where women were still battling for acceptance. Her dad was a right-winger and she was a 3rd generation Smith College graduate, yet Molly remained an independent and (very) critical thinker … delighting in exposing political corruption and incompetence. Her favorite punchlines typically skewered Texas politics and Texas politicians. A Master’s degree from Columbia finalized her educational pedigree, but it was her colorful writing style that elevated her observations to a level of brilliance.

Molly Ivins once described the idea of objective reporting as “horse pucky”. It’s this type of honesty and straight talk that set her apart from so many reporters – both in her day, and even more so today. She knew and admitted that her own political views affected what she wrote, yet readers from both sides lapped up anything she committed to the page. That’s not to say she didn’t ruffle feathers. In fact, her feather-ruffling was world class. During her career, she held newspaper gigs in Minnesota, Austin, New York, Denver, and Dallas … including The New York Times and The Texas Observer. Her column peaked when she was syndicated in more than 400 papers nationally. Molly Ivins was a big deal.

Others interviewed include Rachel Maddow, Dan Rather, Paul Krugman, and Ann Richards’ daughter Cecile. Everyone loves to talk about a woman who brings a 6-pack of beer to a job interview, and referred to herself as the “resident communist”. She admitted to being an alcoholic, and to being lonely at times; but the one thing she never did was sacrifice the work for personal gain. She wrote best-selling books, was a fabulous public speaker, appeared on TV and radio talk shows, and of course, spread her words on the page.

Molly Ivins was a wizard of words. She had much to say and many of us paid attention – whether we agreed or not. Her exceptionally strong and aggressive attacks on George W Bush might be what she is best remembered for, but “gang-pluck” may be a close second. Mostly we admire the tenacity and wit and genius that was the one and only Molly Ivins.