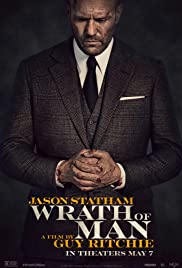 Greetings again from the darkness. Cinematic Alert: Guy Ritchie has gone straight! That’s right, the filmmaker we’ve come to bank on for dynamic action, creative editing, and clever, rapid-fire dialogue laced with dark humor and outright hilarious, offbeat moments, has delivered a straightforward, by-the-book revenge-crime thriller. Of course, despite it being about as good as anything else in the genre, we just can’t help but feel a little (and maybe a lot) disappointed that Ritchie has shifted his approach and left us wondering why. After all, he’s the genius behind THE GENTLEMEN (2019), SHERLOCK HOLMES: A GAME OF SHADOWS (2011), and SHERLOCK HOLMES (2009), as well as his brilliant first two films: LOCK, STOCK, AND TWO SMOKING BARRELS (1998) and SNATCH (2000).

The film opens with an armored vehicle heist that ends in gunfire. This heist and the crew of criminals are the key to the story, and Ritchie utilizes his non-linear, multiple perspective story-telling technique to fill in the gaps for us and provide context to everything else that unfolds. Needless to say, there’s more to this heist than what we initially witness. Jumping ahead a few months, the next thing we see is Jason Statham as the mysterious “H” joining Fortico, the cash truck/armored vehicle company victimized in that early sequence. H is clearly wound tightly and not great at making friends … at least until his heroics thwart another attempted robbery and saves the lives of co-workers Bullet (Holt McCallany) and Boy Sweat Dave (Josh Hartnett).

H’s motivation is slowly revealed, as is the fact that he’s not such an outstanding citizen himself. However, it’s clear his mission of revenge is the most important thing in his life, and he’ll stop at nothing to get the person he’s after. His target is part of a criminal team of former military buddies that include Jackson (Jeffrey Donovan), Ian (Scott Eastwood), Brad (Deobia Oparei), and Sam (Raul Castillo), who want nothing more than one huge score so they can walk away and enjoy life. Other key members of Fortico’s staff are played by Niahm Algar, Eddie Marsan, and Rob Delaney. H’s contacts are played by Lyne Renee, Darrell D’Silva, and Andy Garcia, while singer Post Malone (billed as Austin Post) makes an appearance as a robber.

Filmmaker Ritchie is working with many of his regular collaborators. He co-wrote the screenplay with Marn Davies and Ivan Atkinson, and it’s based on the 2004 French movie, LE CONVOYEUR (“Cash Truck”) by Nicolas Boukhrief, Eric Besnard. Others from his usual team include cinematographer Alan Stewart, composer Christopher Benstead, and editor James Herbert. It’s not unusual to find Jason Statham bring his action expertise to a Guy Ritchie crime movie, but Statham really plays it straight here as he sets out to settle a score. The almost non-existent wise-cracking leaves us feeling a bit adrift due to expectations, but the result is a fine, action-packed movie with one excessively long shootout near the end. Ritchie has certainly earned the right to make the movies he wants, but in the words of main character H, “I do bear a grudge.” 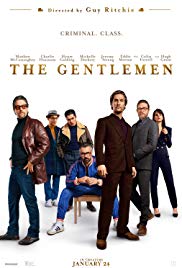 Greetings again from the darkness. Let’s get this out of the way upfront. Filmmaker Guy Ritchie’s return to London crime-comedy is most assuredly a bit too far removed from today’s acceptable Politically Correct line. It features mostly male characters and far too many stereotypes to count. It’s also ridiculously funny. Mr. Ritchie doesn’t take his story or characters too seriously, but he proves yet again that he’s serious about entertainment.

The film begins with Matthew McConaughey ordering “a pint and a pickled egg”, a jolt to the senses, and a very cool opening credits sequence (think James Bond). We then find Fletcher, a sleazy private detective, making a surprise appearance at Ray’s (Charlie Hunnam) house. Fletcher is played by a deliciously smarmy Hugh Grant. He is trying to extort 20 million from Ray by offering up the details he has uncovered about Ray and his boss, marijuana kingpin Mickey Pearson (McConaughey). Conveniently, Fletcher has turned the story into a screenplay, which he has generously agreed to include for the 20 million.

It’s tricky business trying to make drug dealers likable, and Ritchie steers clear of this despite the presence of a few. In addition to Mickey, we have Matthew Berger (Jeremy Strong) who is trying to buy Mickey’s business; Lord George (Tom Wu), who controls the Chinese syndicate; and Dry Eye (Henry Golding), an ambitious underling of Lord George who is anxious to make his own way, by any means necessary. Other players here include Mickey’s wife Rosalind (Michele Dockery, “Downton Abbey”, “Godless”) who runs a “safe space” garage for exotic cars owned by women; Coach (Colin Farrell) who runs a boxing gym for troubled young adults; and Big Dave (Eddie Marsan), a tabloid editor seeking revenge for a dinner party where he felt Mickey disrespected him.

As if all of those characters don’t provide enough humorous crime fodder, we also have a Russian Oligarch, street gangs, heritage estate owners in need of cash, YouTube fight porn, and the plight of Laura Pressfield (Eliot Sumner, Sting’s daughter) in a heroin haven. Fletcher’s ongoing narrative for Ray provides the framework for the film, and each scene is filled to the rim with clever and wise-cracking dialogue – often delivered with flair by one of our colorful characters. Mr. Grant and Mr. Farrell are exceptionally fun to watch, and Ms. Dockery leaves us wishing her Rosalind was more prominently featured.

For some reason he’s never been a critical favorite, though Guy Ritchie garnered a cult following with his early frenetic crime flicks LOCK, STOCK and TWO SMOKING BARRELS (1998) and SNATCH (2000). Lately he’s been focusing on big budget films like SHERLOCK HOLMES (2009), SHERLOCK HOLMES: A GAME OF SHADOWS (2011), THE MAN FROM U.N.C.L.E. (2015) and ALADDIN (2019). He’s back to his roots here, and is joined by many actors and crew members he’s worked with before. Ritchie co-wrote the screenplay with Ivan Atkinson and Marne Davies. His cinematographer is Alan Stewart (ALADDIN) and his film editor in charge of those signature smash-cuts is frequent collaborator James Herbert.

Quick listening pays off in some deadpan one-liners that might otherwise sneak by, although most of them can’t be repeated here. The “c-word” most frequently used in the film is not ‘cash’, and is rarely a term of affection. There is even a Miramax gag. Too soon? Only you can decide. It’s rare for McConaughey to play the heavy, and he seems to relish the opportunity. But then most of the actors seem to really enjoy delivering these lines and wearing these clothes … well except for Colin Farrell’s track suits and spectacles! Certainly this one isn’t for the masses, and undoubtedly people will be offended. This is what happens when you make Guy Ritchie play nicely for a decade.