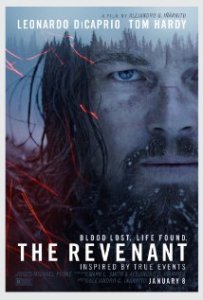 Greetings again from the darkness. “Keep breathing.” A flashback in the opening sequence has Hugh Glass whispering the phrase as advice to his young son Hawk, the product of Glass and his beloved Pawnee bride. The phrase has a recurring role throughout the film … possibly serving as a courtesy reminder from director Alejandro Gonzalez Inarritu to the moviegoers mesmerized (and nearly traumatized) by the incredible brutality of what is on screen.

It’s a master class in filmmaking by those at the top of their game. Inarritu is the reigning Oscar winning director for Birdman or (The Unexpected Virtue of Ignorance), and he has re-teamed with the reigning Oscar winning cinematographer from that movie, Emmanuel Lubezki. Two of the finest actors of their generation, Leonardo DiCaprio and Tom Hardy, strip away any semblance of pampered movie stardom to deliver ultra-realistic performances in a story “based in part” on the true to life novel by Michael Punke.

An early action sequence is startling in its ferocity as Arikara surround and attack a group of hunters and trappers, and the whoosh of arrows – many of which find their mark – abruptly drag us into a world that we are unfamiliar with and certainly unprepared for. It’s early 19th century U.S. frontier, and just about everyone and everything can kill you.  Providing just enough time for us to pry our fingers off the armrests, Inarritu stuns us with what is undoubtedly the most fantastic grizzly bear attack on a movie star ever filmed. In what appears to be a single take (which also happens to be the number of breaths I took), Mama Grizzly treats Leonardo the way a young puppy treats its first chew toy.  Scratched, chewed, tossed and stomped.  This scene is savage and brutal, and sets the stage for the true, yet still unbelievable odyssey of survival by frontiersman Hugh Glass.

Tom Hardy excels as the calmly psychotic villain Fitzgerald, though some of his early hillbilly-tinged dialogue is difficult to catch. His hulking presence fits with our imagined look of the frontiersman of the era … tough and unforgiving nearly beyond belief. His bullying of youngster Jim Bridger (played by Will Poulter) and power struggles with Captain Henry (Domhnall Gleeson) are at frightening levels of intensity. Fans of Tarantino’s Inglourious Basterds will smile as they recognize the name of mountain man Jim Bridger … though that’s one of the few smiles offered by this 156 minute gut-wrenching ordeal. It would not be surprising if DiCaprio’s mantel sports an Oscar in a few months. He is that superb in a role that has nothing to do with good looks or charm.

A tale of survival. A quest for revenge.  It’s both of those, as well as a reminder that nature can be both beautiful and brutal. Some of the photography is almost poetic, and often reminds of the work of director Terrence Malick.  And in the blink of an eye, that moment is shattered by the torrential force of river rapids carrying Glass over the waterfall, or his taking a horseback ride off a steep cliff (one of the most dramatic shots of the film). The journey of Glass is unknown in distance or time in the movie, but there is no question as to the numerous struggles with the elements and the raw physicality required to persevere. If you can avoid diverting your eyes, there are visuals here that will be sincerely appreciated – even as you squirm, cringe and moan throughout.

From a technical standpoint, the film was shot on location in Canada and Argentina using only natural lighting, and emphasizing aspects of nature that often are overlooked. The sound of arrows, bears, and even DiCaprio’s breathing are profound and crucial to the overall effect, as are the animal skin garments and other costumes. It’s impossible to tell where CGI meets reality, but the visceral experience will be quite unique for most viewers … and not soon forgotten.