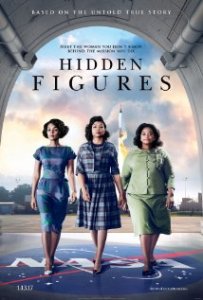 Greetings again from the darkness. The space program has created many iconic images over the years: rhesus monkeys in space suits, the Mercury 7 Astronauts press conference, Neil Armstrong and Buzz Aldrin erecting a flag on the moon, and numerous Space Shuttle missions – some successful, others quite tragic. We’ve even been privy to cameras inside the space station and the NASA control center. Despite all of that, director Theodore Melfi’s (St Vincent, 2014) latest film uncovers a part of history of which most of us knew nothing.

Adapted from the book by Margot Lee Shetterly, the film stuns us with the story of the “Colored Computers” … the African-American female mathematicians who manually checked and cross-checked the endless calculations, formulas and theories required to launch a rocket into space and bring it (and the astronaut) back home. It’s a crowd-pleasing history lesson and an overdue tribute to, and celebration of, three intelligent women of color who played crucial roles in the success of the American space program

We first meet a young Katherine Johnson as a child math prodigy whose school can’t provide her the challenge she needs. Next we see her as a bespectacled adult (Taraji P Henson) on the side of the road beside a broken down car with her friends and co-workers Dorothy Vaughan (Octavia Spencer) and Mary Jackson (musician Janelle Monae). They are on their way to work at Langley in the computing department. Dorothy is the ad hoc supervisor of the group and is in a non-stop battle for the title and increased pay that comes with the job. Mary is the razor-tongued one who is striving to overcome all of the obstacles on her way to becoming the first female African American Engineer at NASA. These are good friends and smart women caught up in the racism and sexism of the times and of the organization for which they work.

Soon, Katherine is promoted to the Space Task Group run by Al Harrison (Kevin Costner). This is a group of true rocket scientists, and Katherine is charged with checking and confirming their work … a thankless job for anyone, but especially for a black woman in the early 1960’s. Her supervisor (Jim Parsons) refuses to give her the necessary security clearance – huge portions of the work are redacted, making it increasingly difficult for Katherine to run the numbers. This is a seemingly accurate and grounded portrayal of racism in the workplace. At the time, racism and sexism were mostly woven into the fabric of society … it’s “just the way things are”. It’s almost a passive-aggressive environment with separate coffee pots and restrooms clear across campus.

There are numerous sub-plots – probably too many. We even get an underdeveloped romance between Katherine and a soldier named Jim Johnson (Mahershala Ali, so great in this year’s Moonlight). We follow Mary as she goes to court in pursuit of the right to take the engineering courses required for her certification. We see Dorothy with her kids, as well as her ongoing head-butting with her condescending supervisor (Kristen Dunst), who claims to have nothing against ‘you people’. Dorothy’s response is clever, crowd-pleasing and a reminder that this is an air-brushed version of reality … but also a view that we rarely see. As the Mercury Project progresses, we note how Harrison (Costner) is so focused on getting the job done, that he is oblivious to the extra challenges faced by Katherine – that is until her emotions erupt in a scene that will have Henson under Oscar consideration.

The slow implementation of the first IBM mainframe is important not just to NASA, but also to Dorothy and her team. They see the future and immediately start self-training on Fortran so that they are positioned for the new world, rather than being left behind. Eye-opening sequences like this are contrasted with slick mainstream aspects like no slide-rules (not very camera friendly, I guess), stylish and expensive clothing for the underpaid women, and a steady parade of sparkling classic cars in vibrant colors – no mud or dents in sight. Sure, these are minor qualms, but it’s these types of details that distract from the important stories and messages.

The film does a nice job of capturing the national pride inspired by the Mercury project, and astronauts such as John Glenn (played here by Glen Powell, Everybody Wants Some!!). It even deploys some actual clips and captures the pressure brought on by the race to space versus the Russians. There is an interesting blend of Hans Zimmer’s score and the music of Pharrell Williams that gives the film a somewhat contemporary feel despite being firmly planted in the 60’s. This mostly unknown story of these women is clearly about heroes fighting the daily battles while maintaining exemplary self-control. It offers a positive, upbeat and inspirational message … believe in yourself, and don’t pre-judge others. Don’t miss the photos over the closing credits, and don’t hesitate to take the family to the theatre over the holidays. 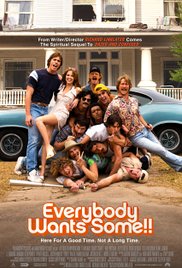 Greetings again from the darkness. Richard Linklater’s now twenty-five plus years of filmmaking are loosely tied together with his constant desire to explore and observe how, within the confines of society, people connect with each other (or don’t). In what he has termed a “spiritual sequel” to his cult classic Dazed and Confused, the filmmaker takes us down memory lane to a college campus as the 1970’s devolved into the 1980’s.

Many of these characters and moments are undoubtedly snatched from Linklater’s own experiences as a college baseball player at Sam Houston State (after graduating from Bellaire High School). Linklater knows these guys. Heck, he WAS one of these guys! The cinematic kinship goes beyond Dazed and Confused, and influence can be seen as the follow-up to his Boyhood film, with some flavor from Animal House and a dose of Bull Durham.

The film opens with Jake (Blake Jenner) driving his 442 muscle car up to the baseball house while “My Sharona” from The Knack blasts from his car stereo. What follows is a look at the behind the scenes tribal nature of a sports team, and how that blends with the predictable manner in which 18-21 year old boys handle a sudden shot of freedom. Conversation and activities center on three things: baseball, girls, and beer … with priorities shifting given the circumstances of the moment. What’s never missing is the ultra-competitiveness of these individuals raised to be the best. Whether it’s nerf basketball in the living room, foosball at the bar, or flicking knuckles, the goal of that point in time is to be better than the other guy … even a friendly game of ping pong turns hyper-tense as it nears game point.

Linklater has assembled a terrific cast that not only succeeds in capturing the time period, but also the essence of the age group. Some of the faces will be familiar, and each character fits nicely into the profile. Tyler Hoechlin (Tom Hanks’ son in Road To Perdition) is team captain McReynolds, Wyatt Russell (son of Kurt and Goldie) plays elder statesman and team spiritualist Willoughby, Juston Street (former Longhorn player) plays the jacked-up overly intense freshman pitcher, J Quinton Johnson is the sometimes rational second baseman, and Glen Powell is a real standout as the smooth-talking and philosophical Finnegan … also a master of pranks. Despite the ever-present quest for girls, Zoey Deutch’s Beverly is the only female character with much screen time, and she makes the best of it as a smart, ambitious love interest for young Jake.

I’ve always believed that the music of our youth goes a long way in defining each generation. Linklater seems to agree (the soundtrack is spot on) as this group is bounced between the fading days of disco, the sterile and soulless transition to Urban Cowboy Country music, and the desperate pleas of new edge Punk Rock. Within the 3 days we are with the guys, they take their athlete swagger to each venue type, and even mix in a party thrown by Beverly’s “artsy-fartsy” group. Figuring out where one fits is a rite of passage not to be missed.

Linklater ensures that our tight knit teammates fill our ears with an endless stream of quips, wise-cracks and put-downs, each designed to register dominance – if only for the briefest moment. We even get a sequence featuring the ballplayers actually playing ball, and though their tone shits once on the field, the personalities remain evident. In addition to adding “f***withery” to our vocabulary, the production design is brilliant and captivating all by itself. The album and book covers, cars (a Gremlin sighting), stereo equipment and costumes all provide the throwback feel necessary for the film. Though it lacks any real plot, and feels meandering (just like its characters), Linklater provides the best insight yet into the driving forces of young male primates of 1980. It’s not always pretty or something of which to be proud, but … that’s what I’m talking about! 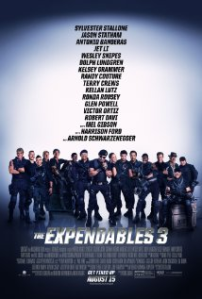 Greetings again from the darkness. Whether you saw the first two in this series will directly correlate to whether you head to the theatre for this third entry. The filmmakers’ attempt at attracting a younger audience by adding a “new” crew and dropping to a PG-13 rating backfires, and will not provide the legs this franchise needed for more installments.

The regular old geezers are back: Sylvester Stallone, Jason Statham, Dolph Lundgren, Terry Crews, Randy Couture, Jet Li (briefly), and Arnold Schwarzenneger. In addition, we get new “old” blood in the form of Antonio Banderas, Kelsey Grammar, Wesley Snipes, Harrison Ford, and the dominating presence of Mel Gibson as the bad guy. The young blood comes in the form of Kellan Lutz, Glen Powell, boxer Victor Ortiz, and MMA superstar Ronda Rousey. The blandness of the newbies simply steals valuable screen time for the old folks, and the movie suffers because of it.

The film’s biggest flaw, however, comes courtesy of the all-time champion screen hog: Mr. Stallone. We understand that this  franchise is his baby, but why field an all-star team if you won’t let them play? Stallone gets a ridiculous number of close-ups and probably three times the dialogue of the runner-up. Snipes gets some time early in the film, replete with a reference to his real life prison sentence for tax evasion, and Ford and Arnold get in a few shots, but the only savior here is Mel Gibson. It’s a reminder of just how good he can be on screen … if we could only forget what a horrible person he can be off screen.

There is no need to go into detail on the plot or describe any of the characters. You know what you are getting if you buy a ticket. It’s just a shame the film’s direction and script aren’t at the level deserving of a cast that includes: Rambo, Mad Max, Blade, Conan, Han Solo, Hercules, Zorro, The Transporter, He-Man, and even … Sideshow Bob!

**NOTE: while Bruce Willis demanded too much money and does not appear this time, there is a Die Hard reference with the “other” Special Agent Johnson (Robert Davi)