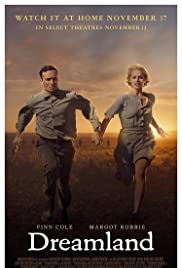 Greetings again from the darkness. Outlaws on the run have been fertile ground for movies over the years, and young director Miles Joris-Peyrafitte and writer Nicolas Zwart give the genre their best shot (pun intended). The easiest comparisons are probably Sam Peckinpah’s THE GETAWAY (1972), Jonathan Demme’s SOMETHING WILD (1986), and Arthur Penn’s Oscar nominated classic BONNIE AND CLYDE (1969). However, given the style of this film, Terrence Malick’s BADLANDS (1973) was likely more of an influence for the filmmakers.

Phoebe Evans (as voiced by Lola Kirke, GONE GIRL, daughter of Bad Company drummer Simon Kirke) is our narrator, and from 1955 she recounts the story of her half-brother Eugene. Most of what she tells takes place twenty years earlier – 1935 Dust Bowl Texas during the Great Depression. Finn Cole (“Animal Kingdom”) stars as Eugene, and we pick up a few years after his dad left the family behind and headed for what he expected would be an easier life in Mexico. Mother Elizabeth (Kerry Condon, “Breaking Bad”) is now re-married to local Deputy George Evans (Travis Fimmel, LEAN ON PETE) and his bad haircut, and they now have a young daughter Phoebe (the magical smile of Darby Camp, THE CHRISTMAS CHRONICLES). Eugene reads Detective stories and mostly tries to stay out of George’s way, while Phoebe is a curious little sister, easily the most intelligent of the lot.

One fateful day, Eugene’s beloved detective stories come to life. After a local bank robbery turns violent, he discovers Allison Wells (two-time Oscar nominee Margot Robbie, I TONYA) hiding in his barn, with a bullet in her leg. Despite the $10,000 reward on her head, Allison sweet talks young Eugene into keeping her whereabouts secret, and helping her plot an escape. She swears she didn’t kill anyone and rationalizes the bank robbery by blaming the government for letting people suffer hard times. Eugene may or may not buy her story, but he recognizes this is the most excitement he’s likely to ever have in his life … plus, he’s smitten.

During the first half of the film, we follow Eugene as he helps Allison and holds the secret. When the second half kicks in, we find ourselves along for the ride as the two are on the run from the law, including Eugene’s stepfather George. Along the way director Joris-Peyrafitte includes some flashbacks to the botched bank robbery giving us a look at Allison’s “Clyde”, Perry Montroy (played by Garrett Hedlund). There are also numerous artsy flashes of coastline, supposedly representing Allison and Eugene’s landing spot should they escape. Of course, we know where this is headed – a shootout finale. Filmed in New Mexico, we do get the feel of the hard life fought by those during this era, including the powerful and devastating dust storms that require gas masks to prevent suffocation. The film is watchable thanks to the performances and atmosphere, though it’s not at the level of similar type movies listed earlier.