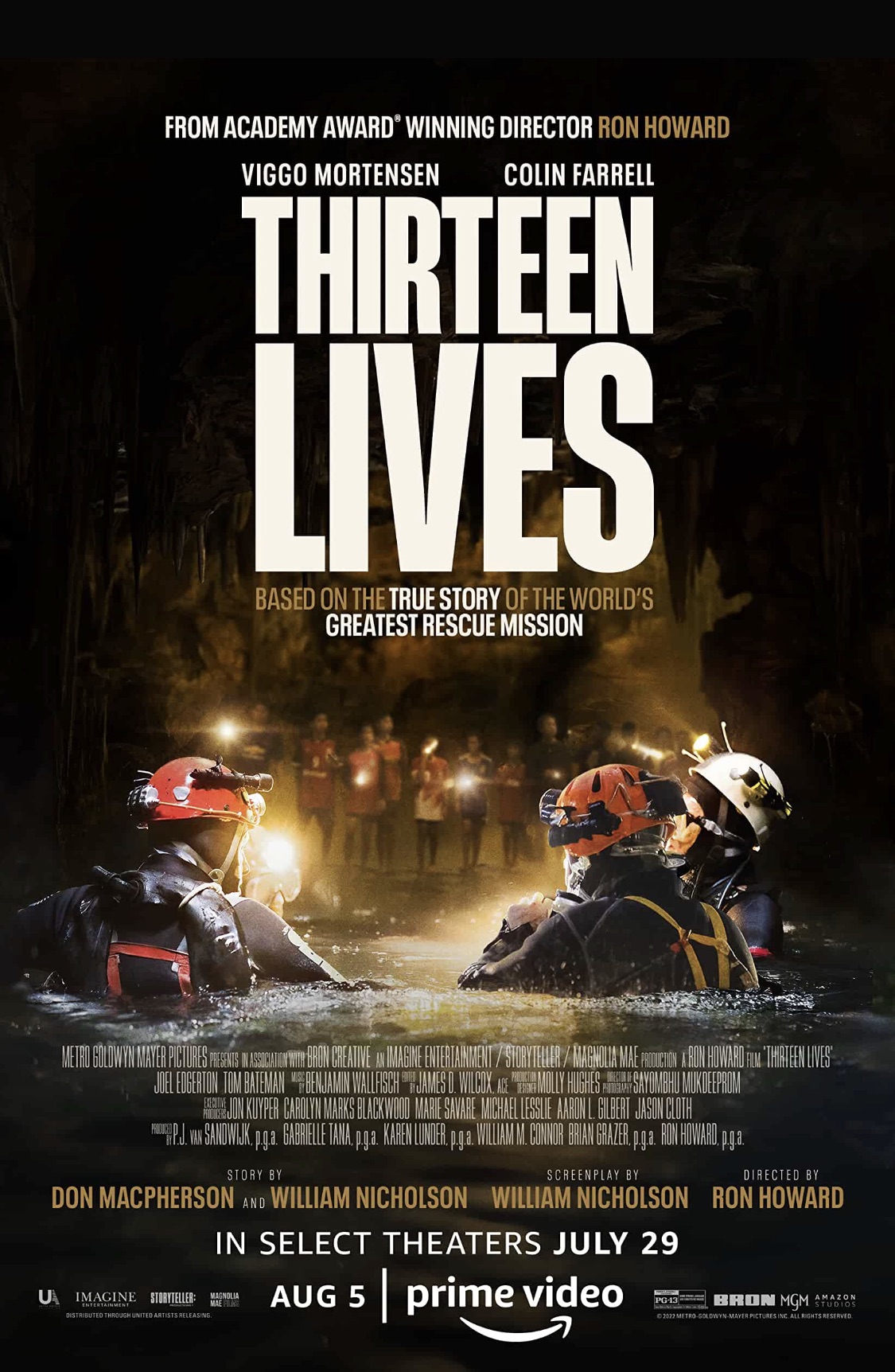 Greetings again from the darkness. It is 2018 and a group of boys have just finished soccer practice. After some motivational words from their coach, the boys start joking around with one of their teammates who has a birthday party slated for later that day.  Boys being boys, they decide to bike over the local cave for some pre-party exploring. Their coach tags along to keep an eye on them. All of that sounds innocent enough until we realize this is the Tham Luang cave, and they don’t realize Thailand’s monsoon season is about to arrive early and with full force.

The film is directed by Oscar winner Ron Howard, who is adept at mainstream storytelling as evidenced by APOLLO 13 (1994), A BEAUTIFUL MIND (2001), and CINDERELLA MAN (2005). The script was penned by William Nicholson (GLADIATOR, 2000) and Don MacPherson (THE AVENGERS, 1998), and tells the all-too-true story of the daring rescue mission that most of recall following on news reports. When the boys were no-shows for the birthday party, parents and friends rushed to the cave to find the bicycles, but not the 12 boys and their coach. Immediately, rescue efforts began with Thai Navy SEALS rushing to the sight. Cave diving is a unique skill practiced by only a few, and is much different than the open water diving in which the SEALS excel.

British cave divers John Volanthen (Colin Farrell) and Rick Stanton (Viggo Mortensen) are called in. Volanthen is the father of a son, and can’t help but empathize with what the parents must be going through, while Stanton is crusty old geezer who admits to not liking kids, while also understanding he’s one of the few on earth capable of making the necessary dive. Once the two men reach the stranded boys and coach, it becomes apparent that, as difficult and challenging it was to find the group, getting them out of the cave seems all but impossible. Death hung heavy over the operation of last resort, which included calling in Dr. Harry Harris (Joel Edgerton), a cave diving hobbyist, and more importantly, an anesthetist.

The diving scenes are expertly filmed by DP Sayombhu Mukdeeprom and underwater camera operator Tyrone Canning. The ever-present claustrophobia and risk of disaster underscores how courageous these men were. Director Howard offers up multiple perspectives: the government, the military, the divers, and the parents. We get very little from those trapped, but that adds to the tension. We get a feel for the entire operation as water is being pumped out of the cave, a water expert and volunteers frantically divert new rainwater into the rice fields, and political maneuvering occurs as the outgoing Governor (Sahajak Boonthankakit) is being set up as fall guy in case the efforts fail.

So many elements could have caused failure – low oxygen levels in the cave, a brisk current of water making diving more difficult, and obviously too much rainwater entering the cave would endanger the boys and the divers. The rescue mission lasted more than two weeks. It’s a disaster movie based on a real event, and follows up the excellent 2021 documentary, THE RESCUE. Evidently the dramatization is for those who don’t watch or have access to documentaries, and as strong as Howard’s movie is, there is simply no way for it to eclipse the documentary or what occurred in real time. At its best, the film offers tension and a reminder of what can be accomplished with collaboration.