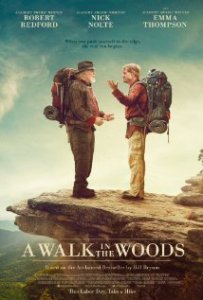 Greetings again from the darkness. Bill Bryson is a terrific and prolific writer known over the last thirty years for his books on travel, science and language. His comedic and witty approach makes his work accessible to even casual readers, yet somehow this is the first of his books to receive the Hollywood movie treatment. Envisioned in 1998 as the third collaboration between Robert Redford and Paul Newman (who died in 2008), there is even a scene reminiscent of Butch and Sundance pondering a cliff side jump/fall. This final version instead teams Mr. Redford with a grizzled Nick Nolte.

Redford stars as Bryson (aged about 30 years over the novel) who has had a successful writing career and has a quite comfortable life with his wife Catherine (Emma Thompson) and their family. His problem is that he hasn’t written anything new in years, save the Forewords for the books of other writers. He is feeling unsettled and almost spontaneously decides to hike the Appalachian Trail (more than 2000 miles). His wife is as supportive as you might guess … she laughs at him, begs him not to go, provides documentation of the dangers (bears, bacteria, bludgeoning), and finally agrees only if he can persuade someone to go with him.

What follows is senior citizen slapstick (a new sub-genre for my gray cinema category). The tone is extremely light-hearted … in the mode of The Bucket List, Grumpy Old Men, and “The Odd Couple”. Some of the scenery is breathtaking, but mostly we get face-offs between the intellectual and thoughtful Bryson, and the slovenly horndog Katz. Director Ken Kwapis is best known for his TV comedy work on “The Office”, “Malcolm in the Middle”, and “The Larry Sanders Show”. Redford and Nolte are (very) old pros who handle the material and surface humor with ease. Nolte brings such a physicality to his performance that it left this viewer wondering if he was really that talented or (hopefully not) that frighteningly out of shape. Either way, it works.

Additional support work comes in quick spurts in the form of Nick Offerman as an REI salesman, Mary Steenburgen as a motel owner, Susan McPhail as a memorable Beulah, and motor-mouthed (and funny) fellow hiker Kristen Schaal whose character would have most hikers hoping for a bear attack.

The film is clearly aimed at a very narrow group of movie goers, and it’s likely that group will be pleased with what they see on screen. The philosophical aspects of the book are mostly glossed over here, and for hiking in the mountains, there is an obvious lack of edginess. The objective is laughs, not deep thought. Objective achieved.