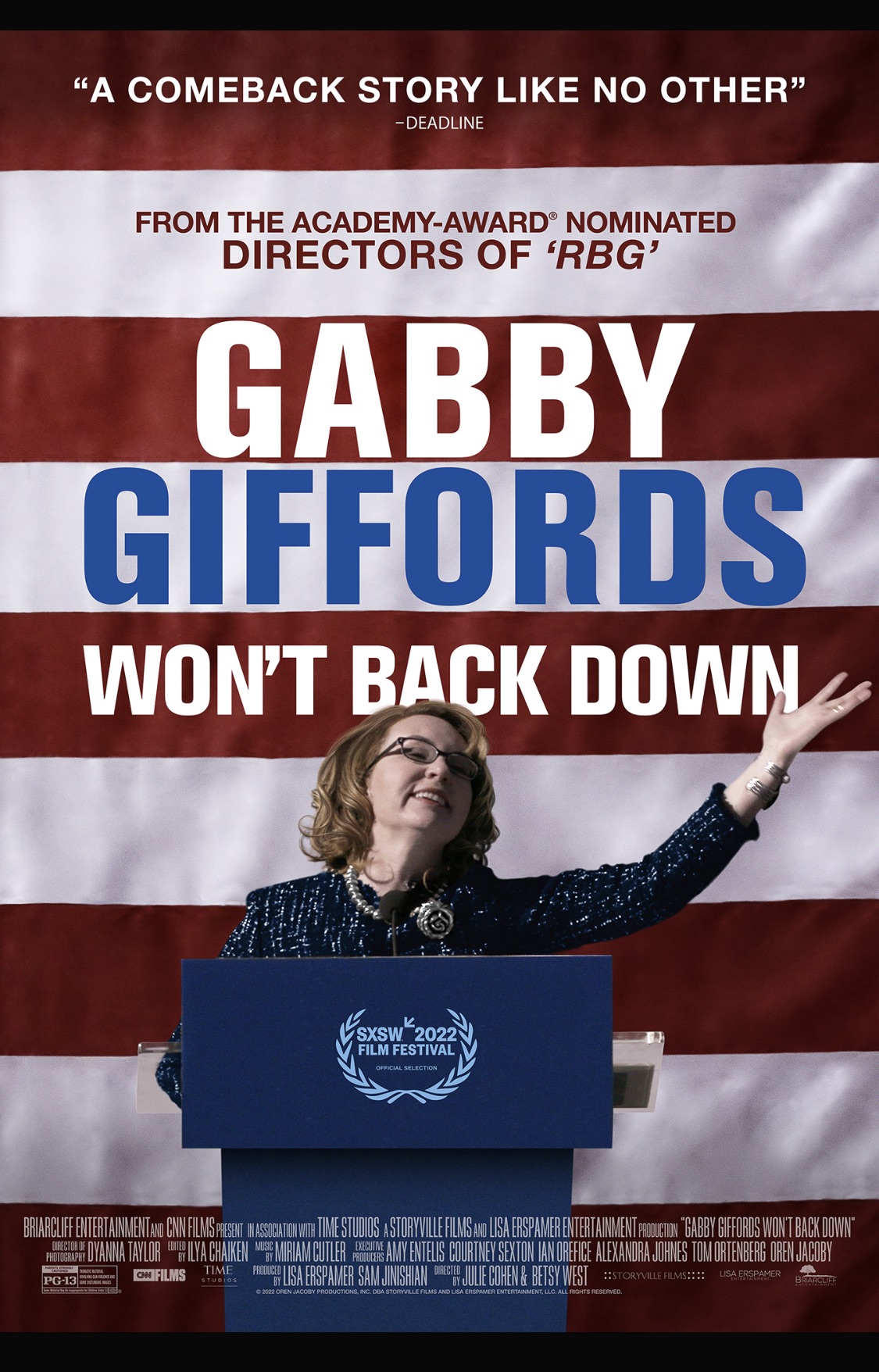 Greetings again from the darkness. If you get shot in the head, you will likely die. If somehow you survive, and never fully regain speaking competence or full physical coordination, what would be your outlook on life and on gun control? Gabby Giffords, a former member of the U.S. Congress, did survive, and co-directors Julie Cohen and Betsy West (the duo behind the 2018 documentary, RBG) show us that Gabby remains a committed optimist and activist … a gunshot victim, a gun owner, and a gun control activist with reasonable goals for gun ownership. She confidently proclaims, “I’m not against guns. I’m against gun violence.”

It was January 8, 2011, when Gabby (I’m referring to her this way out of ultimate respect and because this is how she often refers to herself) was meeting and greeting her constituents outside the front doors of a Safeway store in suburban Tucson. A gunman opened fire attempting to assassinate her, and in the process, shot 19 people, killing six – including a federal judge and a young girl. Though initially reported as dead, Gabby did survive despite the bullet passing through her skull and brain. Gabby’s husband, Space Shuttle Endeavor Commander Mark Kelly, decided to film her in the hospital for the days and weeks after the shooting, so that one day she could see what she had endured. Some of these segments are quite difficult to watch, especially when we see her uncontrollably repeating the word “chicken”, and subsequently breaking down with her speech pathologist. These segments convince us of two things: Gabby’s recovery was remarkable, and she’s an incredibly determined person.

Filmmakers Cohen and West provide some background on Gabby. After graduating college, she had a NYC job with a large firm, and resigned that to move back home and run El Campo Tire, the family business. We even see her appearance in a local TV commercial, her charm and leadership skills clearly on display. After negotiating the sale of the business. She turned her attention to politics and we see some of her early campaigning. Articulate, forceful, and immediately likable, Gabby was a moderate who used logic in the stands she took, and was a rising political star on the national scene. We hear from Gabby’s parents, as well as her stepdaughter, who admits to not being especially warm to Gabby when her dad (Mark Kelly) began dating her. It’s refreshing to see that their relationship is quite strong today.

Aphasia is a disorder that affects a person’s ability to communicate. There can be few things worse for anyone, especially a politician. Former President Barack Obama is interviewed and speaks glowingly of Gabby as a politician and a person; however, it’s the relationship between Gabby and husband Mark that is the heart of her recovery, her work since, and his successful run for Congress in 2020. This is the husband that commanded the Space Shuttle concurrently with his wife’s latest brain surgery. The couple founded a gun control organization in 2013, and it’s now known simply as “Giffords”. We see Gabby’s triumphant return to Washington, DC, and understand her subsequent resignation a few months later. This is the story of a unique and strong woman in a true relationship with a strong man. Together they do amazing things. Consider me “Gabbyfied”.