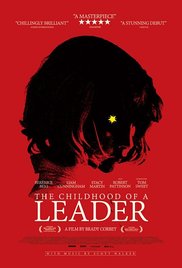 Greetings again from the darkness. Brady Corbet has established a pretty nice career as an actor (Melancholia, Funny Games), and along comes his feature film debut as a writer/director (co-written with Mona Fastvold). In this day of remakes and reboots, this one is anything but. The “Overture” sets the mood with video clips of the WWI aftermath and the explosive score from Scott Walker quickly establishes itself as a character unto itself.

Subsequent title cards are broken into three “Tantrums”, as we witness the ever-escalating inappropriate behavior from young Prescott (Tom Sweet). In what on the surface could be classified as a nature vs nurture expose’, the film leaves little doubt that Prescott is rebelling against the monotony of his environment and the disengaged parents to which he is tethered. However, it also seems evident that young Prescott is inherently “off”. He seems to be cold and emotionally removed as he engages in battles of will with his parents … his father (Liam Cunningham) a US diplomat knee-deep in negotiations that will lead to the Treaty of Versailles, and his mother (Berenice Bejo), a self-described “citizen of the world”.

Two obvious film comparisons would be The Omen (1976) and We Need to Talk About Kevin (2011). The ominous music and settings leave little doubt that we are headed somewhere very dark here, though it’s not in the religious sense of The Omen and it’s more global than the intimacy of ‘Kevin’. Thinking of this as evil in the making would be a just description, though a different title might have held the ending a bit longer.

Support work is provided by Stacy Martin as the French teacher and Yolanda Moreau as the housekeeper who has moments of connection with the challenging Prescott, but Robert Pattinson fans will be surprised at how little screen time he has – especially for dual roles.

Young Tom Sweet is fascinating to watch in a very tough role for a child actor, and director Corbet proves he is a filmmaker we should follow closely. His visual acumen is something special, and offsets a script that could have used a bit of polishing. The movie will probably prove divisive – either you will find it mesmerizing and creepy, or you simply won’t connect at all. That’s often the case with a creative and bold project.

Greetings again from the darkness. Remember the last silent film that received this much adoration, acclaim and publicity? Of course you don’t. It was 1927 and Clara Bow starred in Wings, the most recent silent film to be nominated for Best Picture (it won). My guess is, that streak is about to end thanks to French writer/director Michel Hazanavicius.

No doubt many will avoid this one since it is a Black & White silent film. What a mistake that would be. It offers a wonderfully entertaining and captivating story, and two

outstanding and expressive lead performances. Jean Dujardin is remarkable as George Valentin, one of the biggest movie stars in 1927 (when this story begins). It’s around this time when the “talkies” begin taking over. Valentin is a very likable character, but foolishly believes talking movies are a fad and his fans will remain loyal to him and his traditional silent films. Not only do talkies take off, but the Great Depression also hits. Valentin finds himself out of work and broke.

The most fun in the film occurs when Valentin and Peppy Miller (Berenice Bejo) are on screen together. Their characters have a chance meeting and there is an instant spark. Valentin gets her the first break of her career and before long, she is on the rise as fast as he free falls. Only Valentin’s dog and driver (James Cromwell) remain loyal to him during the tough times, but Peppy works behind the scenes to ensure their bond doesn’t die.

It’s impossible to watch this film and not notice the influence of Singin’ in the Rain and Sunset Blvd. Also, Dujardin’s Valentin looks to be a cross between Douglas Fairbanks and Gene Kelly, replete with the electric matinee idol smile. Both Dujrardin and Ms. Bejo (who is the director’s real life girlfriend) have the elastic face and bright eyes necessary for silent film stardom. They really allow us as viewers to forget the silence and enjoy the characters.

Unless you are a film historian or a real movie buff, your only exposure to silent films may be from short clips or Mel Brooks‘ Silent Movie. This one will change that and offer you glimpse at just how powerful film images can be.  Another thing that will jump out is how crucial complimentary music is.  It will guide you through the scene.  Ludovic Bource is responsible for the terrific original score, and other pieces of music are also used … particularly Bernard Herrmann‘s piece from Vertigo.

This is a fully realized story with excellent character development. You might wonder how this is possible with no dialogue, but that’s why this is a must see film garnering an abundance of critical acclaim. It’s very easy to access and is purely entertaining … with moments of both happiness and sadness. It has everything a really good movie should have … just with fewer lines of dialogue and a really smart dog!

SEE THIS MOVIE IF: you want to see one of the best movies of the year OR you don’t believe a silent movie can hold your attention (this one will prove you wrong)

SKIP THIS MOVIE IF: you just don’t like movies … sorry, I can’t think of another reason.