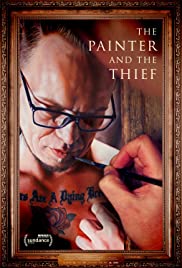 Greetings again from the darkness. Artists think differently than the rest of us. Not only do they see the world with an offbeat or skewed vision, but they process life events in ways we sometimes can’t fathom. For instance, if a crime were committed against you – say, your property was stolen – your natural response would be anger, or a desire for justice for the perpetrator. In Norwegian director Benjamin Ree’s documentary, Czech artist Barbora Kysilkova reacts much differently when her two most valuable paintings are stolen. She befriends the thief.

We see the security video footage. Karl-Bertil Nordland and another man break into Oslo’s Galleri Nobel and then walk out with Barbora’s paintings. Upon being apprehended, the painter and thief have a chat in the courtroom. Bertil confesses that he chose the paintings because they were “beautiful.” The artist is intrigued and invites the thief to pose for a portrait when he is released from jail. As if this situation isn’t bizarre enough, Bertil claims he has no idea where the stolen paintings are, and has no memory of what happened. Yes, he’s also a drug addict.

It’s a bit uncomfortable to watch post-prison Bertil lounging on Barbora’s sofa as she sketches him and they converse about philosophies of life. Slowly, their relationship builds into a friendship. It’s an unlikely connection through art. We get a rare glimpse of an artist at work, as we see Barbora in her studio working on her pieces. Of course, she is also saddened by the loss of the two unrecovered pieces, and we also witness the artist struggle with the commerce/business side of art, as she faces frequent rejections from galleries as she attempts to display her work. This is on top of the lectures from her boyfriend … lectures delivered in the manner a parent would talk to their kid.

One of the more surreal moments occurs when the camera films Barbora at Bertil’s place, and she sketches him and his girlfriend in a provocative pose. During all of this, we hear Barbora discussing why she finds Bertil interesting, despite his junkie-criminal lifestyle. After all, he is the kind of guy who scores a fix on his way to rehab. Things get very interesting … in a weird way … when Ree turns the tables and films Bertil analyzing Barbora.

These two have studied each other over the years, and may have a better understanding of their friend, than they do of themselves. Watching Barbora act as caregiver for an injured Bertil is a confusing development to process, but it goes back to how artists see the world through their own eyes. Her paintings may be ultra-realistic, but her life barely qualifies as our reality … at least until the rent is past due. The connections through the circle tattoo may come across as somewhat creepy, and we find ourselves a bit skeptical of many scenes where the camera is present, but there is no denying this works as a remarkable character study of two people we wouldn’t normally categorize as friends.

Neon is presenting this via Virtual Cinema beginning May 22, 2020