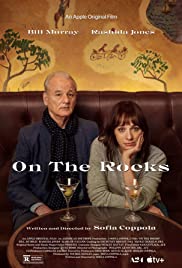 Greetings again from the darkness. Sofia Coppola cemented her place among top filmmakers with the instant classic LOST IN TRANSLATION (2003). Sure, she’s had other successes with THE VIRGIN SUICIDES (1999), MARIE ANTOINETTE (2006), and SOMEWHERE (2010), but it’s her thought-provoking and self-analytical film with Bill Murray and Scarlet Johansson that struck an emotional nerve for so many. This time, she reunites with Murray in what could easily be a companion piece, as it’s both familiar and not.

Rashida Jones (“Parks and Recreation”) stars as Laura, who is trying to find herself as a writer amidst the fatiguing responsibilities that go with being a mother and wife, and having age 40 staring her in the face. Marlon Wayans (WHITE CHICKS, 2004) plays her charming, just-started-a-new-business husband Dean, who may or may not be cheating on her. Whether it’s Laura’s concern over how “boring” she has become, or the little clues she finds … well, it’s probably nothing … but doubt grows into suspicion.

It’s at this point when Felix (Murray), Laura’s father, enters the story. Felix is a likable cad (probably an archaic word, but it fits), who has never been much of a father to Laura. Instead he chases fun and skirts, and begins convincing Laura that all men are like him. Director Coppola examines contemporary relationships, and the insecurities that come with a long-term commitment. Can one person be enough? Can men be trusted?

What follows is an offbeat father-daughter husband-spying adventure, and an ill-advised one at that. Felix pulls up in his Alpha Romeo, and the two enjoy caviar on their stakeout – with the top down on the convertible. This leads to a scene clearly written to take advantage of Bill Murray’s talents. As he zips the sports car through the city, he gets stopped by New York’s finest. Depending on your perspective, you’ll either view this as a prime example of white privilege, or as the benefits of spending one’s life being a good listener, attentive to others – a people person making connections.

There is a great line from Felix that carries a great deal of weight, although it’s easy to treat it as a ‘throw away” line. He advises Laura, “You need to start thinking like a man.” Spending time with her dad makes her wonder if he’s right – do all men think like him? This plays well against the non-stop yapping mother Laura gets regularly cornered by when dropping her daughter for school. Jenny Slate is perfectly annoying as the mother who not only still thinks the world revolves around her, but also that the world is still interested.

Of course, we know, and Laura figures it out: her father worships her. He may gallivant around the globe looking for his next notch, but he absolutely realizes what a beautiful soul his daughter is, and what a better person she is than him. Probably the best lesson Ms. Coppola offers is that communication is key … or lack of communication can cause a thought to spin out of control. Sofia Coppola and Rashida Jones are both daughters of giants in their field, and likely could relate to having a larger-than-life figure cast a shadow. Eagle-eyed viewers will spot Barbara Bain as Gran. Ms. Bain rose to fame as Cinnamon Carter in the 1960’s TV series “Mission: Impossible”. She’s now 89 years old and still working! Sofia Coppola has delivered yet another film that’s interesting and provides terrific conversation after watching.