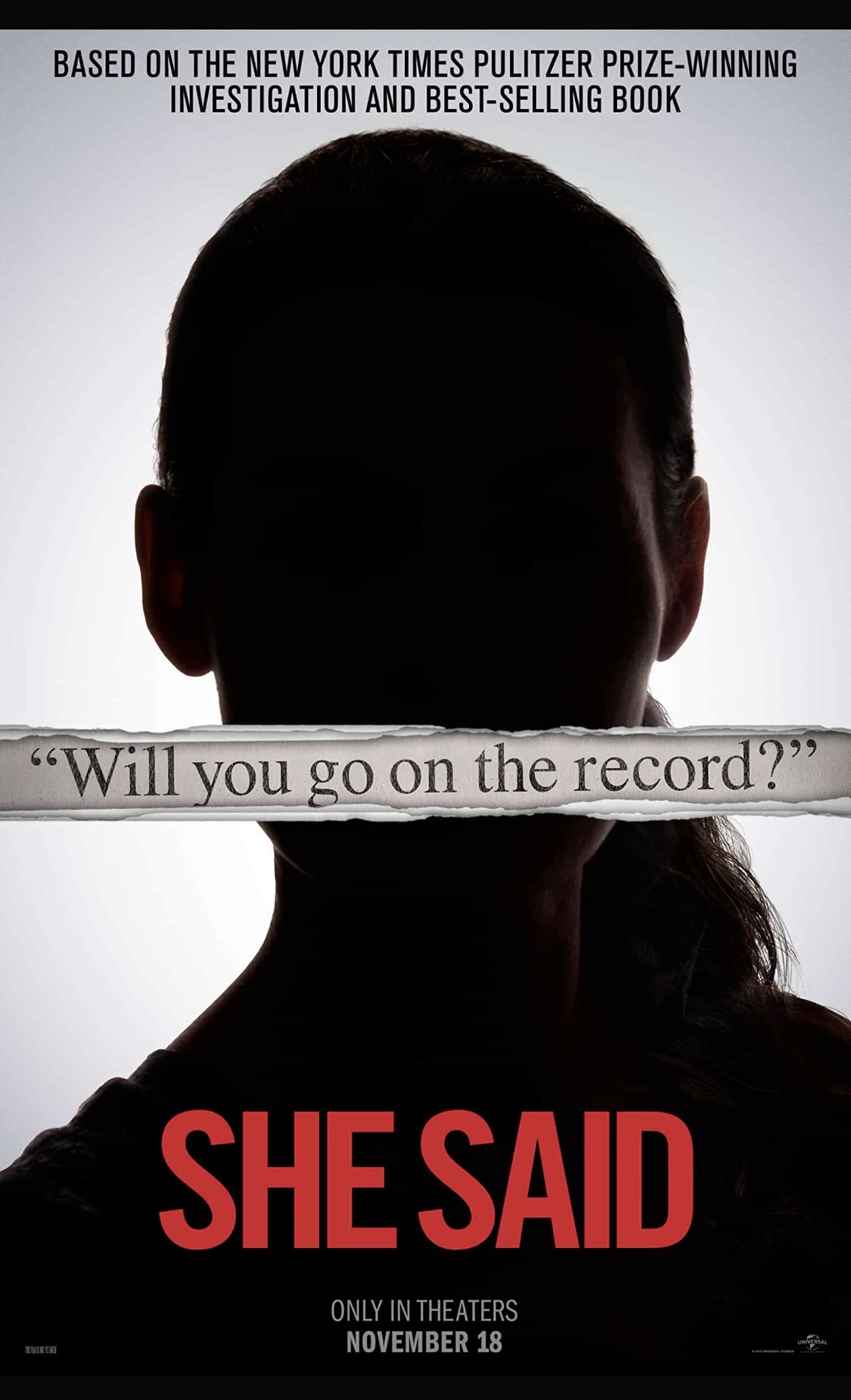 Greetings again from the darkness. Allow me to open with how I fully support the idea of telling (and re-telling) these stories and exposing those behind the many instances of intimidation and abuse that occurs in and around the workplace. Newspaper articles, magazine articles, TV shows, podcasts, books, and movies all find an audience and help educate and enlighten those who might become more attuned to the topic. So, even though most everyone knows the saga of movie mogul and chronic abuser Harvey Weinstein, there is a place for director Maria Schrader’s (I’M YOUR MAN, 2021) film … even as an imprisoned Weinstein continues to face additional charges in various states. Rebecca Lenkiewicz (IDA, 2013) adapted the screenplay from the 2019 book by Jodi Kantor and Megan Twohey; a book based on their New York Times investigation and series.

Carey Mulligan stars as Megan Twohey, and Zoe Kazan as Jodi Kantor. Twohey is the more veteran and hardline of the two, while Kantor is more sensitive and keyed into the feelings of the victims. We see Twohey working on a Trump story prior to the 2016 election, but Schrader’s film mostly revolves around these two hard-working and focused women researching the Weinstein story, while also making sure we understand the added pressures of being working and career-minded mothers of young children. Some scenes are even shot within the actual New York Times offices, and of course, we get the obligatory exterior building shots as well.

One of the biggest takeaways from this is the continuous challenges reporters face when trying to get sources to go on the record for a sensitive story. Added complexity here comes in the form of Non-Disclosure Agreements, settlements, and hush money. In fact, much of the screen time involves the reporters trying to talk to people who aren’t legally allowed to talk, and to verify just how many instances of “settlements” occurred involving Harvey Weinstein.

Supporting roles are covered by Patricia Clarkson as Rebecca Corbett, Andre Braugher as Dean Baquet, Jennifer Ehle as Laura Madden, Samantha Morton as Zelda Perkins (a terrific scene), and Ashley Judd, who plays herself – the one who kicked this into the headlines. We get the feeling the filmmakers hoped this would be a modern day ALL THE PRESIDENTS’ MEN (1976), though it has more in common with SPOTLIGHT (2015). Where this film struggles is that most of us know the story so there are no ‘aha’ moments, and the best parts are the interviews with those playing the victims … and there simply aren’t enough of those moments. Instead, we see a lot of reporters on the way to investigate, or preparing to report, or taking notes … but the real crux of the story eludes us and we are left wondering if this movie is strong enough given the real life impact of Twohey and Kantor. Kudos to Schrader for never showing Weinstein’s face, but instead focusing on the women.

Greetings again from the darkness. Gerard Butler doesn’t always make wise decisions when picking his projects. In the right role, men admire him for being cool and tough, while women are enchanted with his charm. The role of Secret Service Agent Mike Banning is just about perfect for Butler. He not only gets to be an action hero, but he also has a solid relationship (with Radha Mitchell) and is a role model for the President’s young son. Butler is so nearly perfect here, he should be cast in the next Old Spice commercial.

The movie starts out with the backstory on how Agent Mike Banning (Butler) fell out of grace with the President and was reassigned to a desk job at Treasury. Pushing paper is like Siberia for a man of Banning’s make-up. A terrorist invasion on the White House tosses Banning right smack in the middle of a violent and explosive act designed to leave the entire United States decimated. Circumstances being what they are, Banning is the only hope.

Movies like this must have a quality bad guy. We get icy Rick Yune as Yang, a North Korean criminal mastermind. You might think this is extremely timely given the real world in North Korea, but Yune is certainly no Governmental official. The attack is very well planned and leaves Yune locked in the White House security bunker with the President, Vice President and Secretary of Defense (a spunky Melissa Leo). At the Pentagon, this leaves the Secretary of State (Morgan Freeman) and a bombastic General (Robert Forster) jockeying for control. Angela Bassett is there to referee. As movie goers we are accustomed to seeing Morgan Freeman as God, as the President, and as the brains behind Batman.  Secretary of State seems a step backwards career-wise, so it’s a relief when he assumes Presidential control.  While this group of officials sits around looking anxious and worried, Agent Banning is a one man wrecking crew against the terrorists.

The images of the White House being attacked will prove quite disturbing to any US citizen and the sequence comes off as something that could possibly occur. Let’s hope director Antoine Fuqua (Training Day) performed sufficient research to know this attack couldn’t actually happen. Still, Aaron Eckhart is a believable President … in the Harrison Ford (Air Force One) mode, tough as nails but also intelligent.

There are of course similarities to Clint Eastwood’s 1993 film In The Line of Fire, and many are comparing it to the 1988 classic Die Hard. For me, the difference in Gerard Butler’s Mike Banning and Bruce Willis’ John McClane is that Butler is the right guy in a bad place, while McClane was a good guy in the wrong place. The action sequences in Olympus Has

Fallen are even bigger than Die Hard, and it’s certainly clear there is much more at stake.

The cast also includes Dylan McDermott and Ashley Judd. Without giving anything away, I’ll admit this is my favorite Ashley Judd role of all time. It will be interesting to see how this one compares to Roland Emmerich’s White House Down, which comes out in June. The story lines are almost identical with WHD starring Channing Tatum and Jamie Foxx. Olympus Has Fallen is a very satisfactory action movie, with many traditional elements, and Butler has re-established himself as a real movie star. It’s doubtful Emmerich’s version will stand up against this one.

SKIP THIS MOVIE IF: watching the White House get attacked is something you prefer not to see even if it’s only a movie