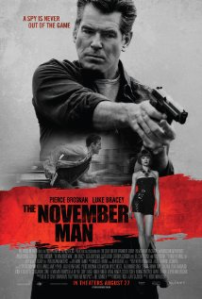 Greetings again from the darkness. Somewhere there must exist a checklist of the main plot lines for all the spy thrillers and action films ever made. Should you wonder what’s on the checklist, then this is the movie for you. Ambition it does not lack. Striving to be an edgy Bond flick, an action-packed Bourne thriller, and a complex Le Carre mind-twister, the film, unfortunately, excels at none of these … though does manage to be entertaining enough for the pre-fall dead zone (timing is everything).

Pierce Brosnan stars as a retired CIA operative Devereaux, called back into duty 5 years after a mission gone bad (seen courtesy of flashback). His boss Hanley is played by the always interesting character actor Bill Smitrovich, but we are supposed to buy in fully to the mentor vs protégé story line of Brosnan and Luke Bracey (the next in a long line of hunky Aussies).

Geopolitics, inner-office power plays, and mistaken identity all come into play, as do the innocent neighbor, an imperiled young daughter and backroom deals between the CIA and a Russian President-elect (Lazar Ristovski). All of this plus a quietly creepy assassin played by extremely limber gymnast Amila Terzimehic, a revenge-seeking (former Bond girl) Olga Kurylenko playing dress up, the rarely seen/scene-stealing Will Patton, car chases and crashes, gun fights, fist fights, knife fights, computer tracking and sneaky drones. Of course, all of these are on the aforementioned checklist.

Director Roger Donaldson has a varied career with such films as No Way Out, Cocktail, The World’s Fastest Indian (highly recommended), and The Bank Job. This film is based on Bill Granger’s Devereaux novel “There Are No Spies”, and Donaldson’s eye for action sequences are a plus. However, the saving grace here is Mr. Brosnan. He brings an edge that his James Bond never could … he even yells a few times! However, as with most movies, the script makes or breaks, and in this case the plausibility test is flunked, despite the numerous checked boxes.

***NOTE: I can’t help but notice the trend of aging actors (60 plus years old) trying to prove their high testosterone levels in uber-serious action-thrillers – Pierce Brosnan, Liam Neeson, and Denzel Washington (turns 60 this year) come to mind, and of course the most obvious is Sylvester Stallone, who at least plants his tongue firmly in cheek for The Expendables franchise.

***NOTE: If you would like to see Mr. Brosnan give an edgy, offbeat performance in a better film, I recommend The Matador (2005)

SEE THIS MOVIE IF: you have wondered how Pierce Brosnan would have fared in the Daniel Craig “Bond” films

SKIP THIS MOVIE IF: you are hoping for a clever spy thriller in the mold of Le Carre’.