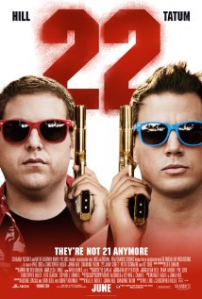 Greetings again from the darkness. In this day of 3 minute trailers that give away the best gags, if one can walk out of a comedy having laughed a few times, it must be deemed a success. Such is the case with this sequel to 21 Jump Street (2012), which was borne from the 1980’s hit TV show of the same name.

A couple of years ago, officers Schmidt (Jonah Hill) and Jenko (Channing Tatum) went undercover at a high school to bring down drug dealers. This time, they head to a local college for the same purpose. If that sounds like a re-tread, at least the film acknowledges such. In a scene with Nick Offerman, a few minutes of self-parody are devoted to the misgivings of re-do’s … even with double the budget! Co-directors (back from the first, and fresh off The Lego Movie) Phil Lord and Christopher Miller make this film the butt of its own joke, and for the most part, that approach works.

The best buddy comedies work because of two things: the script and the rapport of the leads. The pairing of Jonah and Tatum works very well, even when we get the predictable split into liberal arts and sports (take a stab which actor gets which assignment). There are a couple of actresses who play vital supporting roles – Amber Stevens as Schmidt’s love interest, and Jillian Bell in an offbeat and quite funny take as the nemesis. Oddly enough, Jenko’s relationship is a bro-mance on the football team with the QB played by Wyatt Russell (Kurt and Goldie’s son). One of the poor decisions was to quadruple the screen time for Ice Cube … his antics are funny in more limited doses. Very limited.

There are some terrific “old man” jokes, more than 25 songs, and references to Maya Angelou and Tracy Morgan … both who have been in the news for less-than-uplifting reasons lately. Most will find the best sequence to be after the movie ends and before the credits begin. The mock sequels (23 Jump Street, 24 …) appear in rapid fire mode with a couple of cameos and some creative “schools”. While the movie wobbles between spot on and over-the-top, it delivers what we expect … a funny enough sequel to a funny enough tribute movie.

**NOTE: this sequel offers up a Richard Grieco cameo rather than the Johnny Depp cameo from the first one

SEE THIS MOVIE IF: mindless comedy hits the spot during the summertime OR you enjoyed 21 immensely and have been anxiously awaiting 22

SKIP THIS MOVIE IF: you are expecting another Johnny Depp cameo OR Ice Cube yelling and scowling is an annoyance you prefer to avoid