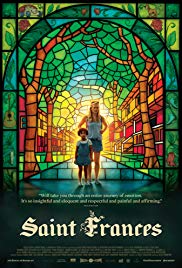 Greetings again from the darkness. The old saying goes, “Fake it till you make it.” Well when it comes to life and adulting, no one ever really makes it. Everyone has their doubts and troubles and challenges. And by everyone, this means every single person, regardless of whether you think they have it all figured out. This is the first feature film for director Alex Thompson and the first feature length screenplay from Kelly O’Sullivan, who is also the lead actress here. The script is so smart and intimate that we tend to believe she included at least some of her own experiences. Either way, this is superb independent filmmaking … the type usually reserved for festival runs.

Ms. O’Sullivan plays Bridget, a 34 year old “server” who seems cloaked in a type of sadness or melancholy that elicits first disinterest, and then attraction from the two guys we see her meet at a party. Once a promising writer, Bridget’s life has started to slip away. As often happens when things aren’t going well, life gets more complicated for Bridget. Her casual relationship (“This is NOT a relationship!”) with uber-nice guy Jace (Max Lipchitz) leads to an unwanted pregnancy, followed by an abortion. Jace is very supportive during the process, and seems to be a wonderful guy. Rather than giving him a split personality with an evil side, the film allows Jace to be Jace, while Bridget treats him as a convenience (can you say turned tables?).

Bridget soon takes on her first ever nanny job, even though it’s pretty clear she is clueless when it comes to caring for kids. Her “job” is rambunctious and whip-smart 6 year old Frances (Ramona Edith Williams), daughter of mixed race lesbian couple Marin (Charin Alvarez) and Annie (Lily Mojekwu). Marin recently gave birth and is suffering from postpartum depression, while Annie is a stressed-out attorney. In other words, they are all a mess. What stands out here, and throughout the movie, is that these characters all seem like real people … folks we could know. That’s why we immediately click with the story and the characters, especially Bridget and Frances.

There are times the film gives off the vibe of a feminist handbook, as it touches on modern world dating and sex, depression, sexual orientation, contemporary societal standards, the conflicting role of religion, and the challenges faced both professionally and personally in a world that is slow to accept the new normal. Despite that, the film never loses focus on what makes it work … the budding relationship between Bridget and Frances, and the forces at work around them (including Joan Jett and a fulsome music teacher/poet played by Jim True-Frost).

One of the more impactful moments occurs when Bridget’s mother (Mary Beth Fisher) is recollecting an emotion she experienced when Bridget was a baby. It’s a terrifying and honest moment that most movies wouldn’t touch. Kelly O’Sullivan wrote a terrific script, but it’s her performance that sticks with you. She reminded me of Brie Larson in SHORT TERM 12 in that the character seems so real … so authentic. There is also a lesson here in that our lives can be impacted by anyone we meet – even a precocious 6 year old.