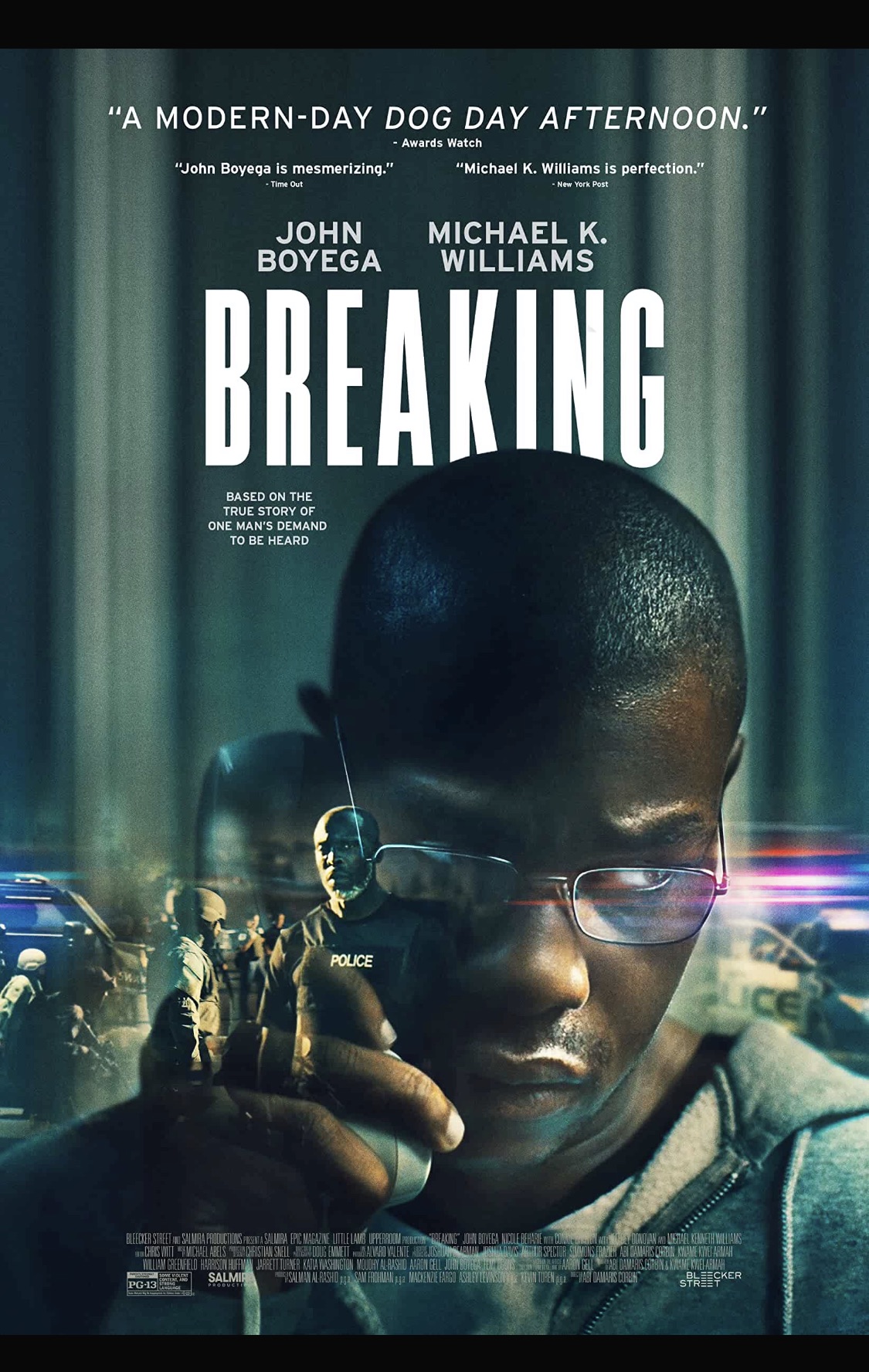 Greetings again from the darkness. Bank robbers are commonplace in movies, and some focus on the planning stage, while others look to the actual robbery or the escape. Writer-director Abi Damaris Corbin and co-writer Kwame Kwei-Armah tell the true story of a man who went into a bank, made a bomb threat, and took hostages … all while having no intention of stealing the bank’s money. A former Marine went to this extreme to make a very visible point about how veterans are mistreated, especially by the VA.

John Boyega (Finn from “Star Wars” franchise) stars as Brian Brown-Easley, a veteran struggling in a day-to-day existence, when a clerical error at the VA results in his latest disability check being withheld. This leaves Brian homeless, and the only assistance the VA offers is a brochure. Brian chats lovingly with his young daughter Kiah (London Covington), but their conversation is cut short because he can’t afford to add more minutes to his phone. Brian is so disturbed by the situation that he builds what appears to be a bomb and heads down to the local Marietta Wells Fargo branch.

The tension escalates quickly when Brian drops the handwritten note at the teller window, “I have a bomb.” Rosa (Selenis Leyva) tries to stay cool, but, Estel (Nicole Beharie), the Branch Manager, notices the panic in her eyes and quickly ushers out as many customers and employees as she can. Brian allows everyone to leave except Rosa and Estel, and he encourages them to call 911. It turns out he wants all law enforcement and media to show up so he can tell his story and relay the lack of respect from the VA.

Soon, Brian is chatting with a local TV news producer (Connie Britton), and then, after a delay, the hostage negotiator (the final big screen appearance of the great Michael Kenneth Williams). Brian and the negotiator form a quick human connection that is contrasted with the macho SWAT team leader played by Jeffrey Donovan and his world class condescending smirk. Brian is likely the most sympathetic stick-up man you’ll ever see. What we quickly realize is that the movie is a bit manipulative in making its point that the VA is the villain here, but some tremendous work by the actors keeps us engaged and caring about Brian. His interactions with Rosa and Estel are terrific, and the chats with Williams’ negotiator are even better. All four actors go above the material, and Ms. Beharie is a standout. Additionally, this is one final reminder of how Michael Kenneth Williams made every role his own, and every show and movie just a bit better.

This entry was posted on Thursday, August 25th, 2022 at 5:20 pm and is filed under Drama, Thriller. You can follow any responses to this entry through the RSS 2.0 feed. You can leave a response, or trackback from your own site.