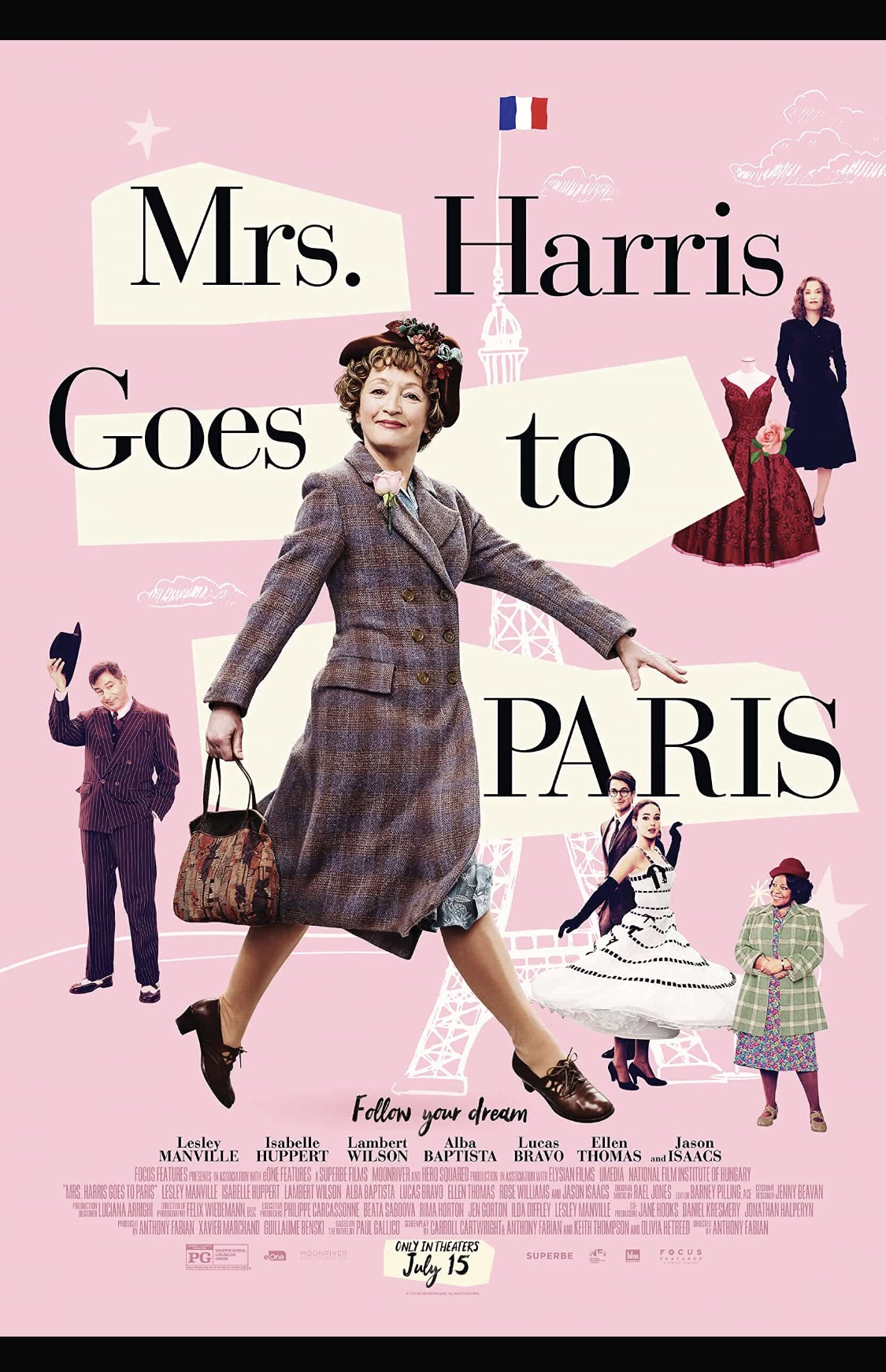 Greetings again from the darkness. Leslie Manville is one of those actors we take for granted. She’s so talented and versatile and typically “perfect” in the supporting roles she embodies. For us followers of British filmmaker Mike Leigh, we’ve been treated to numerous Manville performances over the years, but it’s likely she’s most widely recognized for her Oscar nominated performance in Paul Thomas Anderson’s PHANTOM THREAD (2017), where she played Daniel Day-Lewis’ sister and business partner with an icy efficiency that added heft to a terrific film. This time, Ms. Manville embraces the lead and delivers a turn as a Mrs. Harris that we would all welcome into our lives.

Writer-director Anthony Fabian (SKIN, 2008) co-wrote the script with Carroll Cartwright (WHAT MAISIE KNEW, 2012), Keith Thompson, and Olivia Hetreed (GIRL WITH A PEARL EARRING, 2003), and it is based on the 1958 Paul Gallico novel, “Mrs. ‘Arris goes to Paris”. There were four books in the series (leading to speculation of sequels), and Mr. Gallico also wrote “The Poseidon Adventure”, from which the 1972 disaster movie was adapted. We first meet Ada Harris (Manville) as she makes her rounds cleaning the homes of upper crest society. She rides the bus with her best friend Vi (Ellen Thomas), and occasionally meets up for an end of the day drink at the local pub, where Archie (Jason Isaacs) flirts a bit with her. Mrs. Harris has been biding her time for news of her beloved Air Force husband, MIA for 12 years. It’s a simple life she leads, but it’s one filled with optimism and hope and determination to live the right way.

The film shifts into ‘Adult Fairy Tale’ mode when one day Mrs. Harris falls hard for a couture Dior dress purchased by one of her clients. It’s a symbol of the beauty and opulence that has eluded Mrs. Harris her entire life. At that moment, she commits to saving enough money to purchase her own Dior dress … something that she has no rational use for. It’s mostly just a way for one ‘invisible’ woman to fulfill her own fantasy by experiencing a taste of dreamlike luxury … a rare pursuit of pleasure for this woman. A somewhat comical chain of events occurs in montage fashion as Mrs. Harris scrimps and saves (and gambles) her way to the monetary goal that puts the dress in play.

Once she arrives in Paris, the film becomes a fish-out-of-water story, as Mrs. Harris seemed to think she could stroll up to the House of Dior and have a dress wrapped up for the trip home. Claudine Colbert (the always great Isabelle Huppert), the gatekeeper of Dior, will have none of this … Dior is only for those who are deserving, not the riffraff. The scenes with the two women expertly highlight the personality differences. Mrs. Harris immediately begins to win people over with her nice demeanor. One of the keys is Marquis de Chassagne (Lambert Wilson), who takes a liking to her and invites her to view the new line as his guest. Another is Andre Fauvel (Lucas Bravo), the young accountant whose cutting-edge ideas are ignored by the “old school” stodgy types in charge. Lastly, there is supermodel Natasha (Alba Baptista), as the “Face of Dior”. She admires Mrs. Harris’ tenacity and kindness, which assists Natasha is discovering her true self.

Seeking to reach her own goal, Mrs. Harris ends up affecting the future of many others, as well as the future of the House of Dior. She has the kind of demeanor and spirit that draws in other people, while inspiring goodness. This is less about exposing elitism than applauding niceness. People are drawn to inherently nice people. As an adult fantasy, the film is likely to hold the most appeal for middle-aged women, and should be a perfect day at the theater for mothers and their adult kids.

This entry was posted on Thursday, July 14th, 2022 at 10:38 pm and is filed under Comedy, Drama. You can follow any responses to this entry through the RSS 2.0 feed. You can leave a response, or trackback from your own site.