EVERYTHING EVERYWHERE ALL AT ONCE (2022) 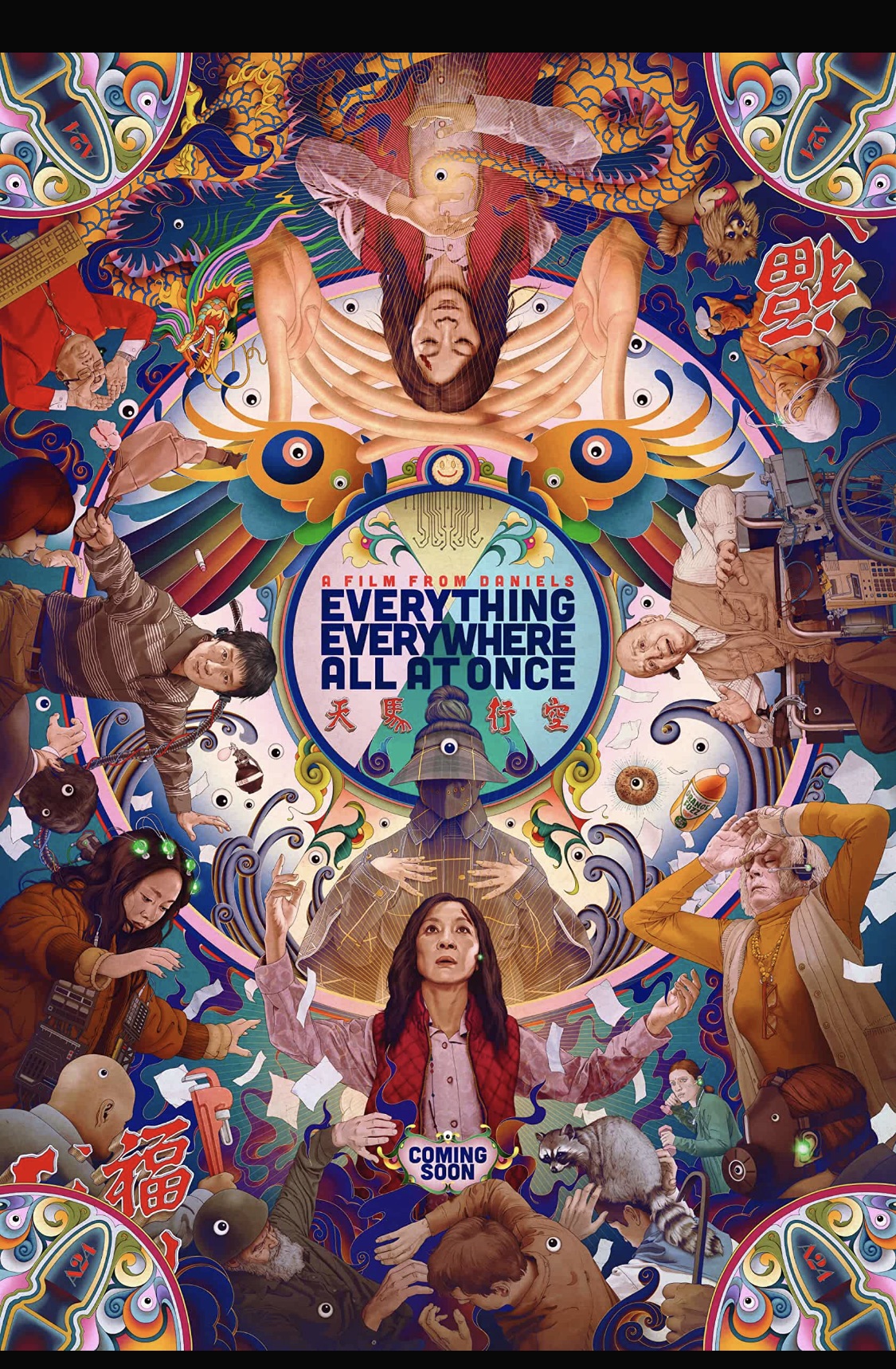 Greetings again from the darkness. It’s bonkers, I tell ya’! Co-writers and co-directors Daniel Kwan and Daniel Scheinert, known collectively (by their choice) as “Daniels”, follow up their ‘farting corpse movie’ SWISS ARMY MAN (2016) with one that is somehow more bizarre, more audacious, and more fun. It’s one of the most innovative films I’ve seen in a while, and although I can point out influences, I’ve yet to come up with a movie comparison that seems just or fair.

Every small business owner can relate to the stress Evelyn Wang (Michelle Yeoh) is under as she attempts to organize her documents in preparation for an IRS audit of the laundromat she owns with her husband Waymond Wang (Ke Huy Quan). As if that’s not enough, her father is scheduled to arrive the same day. She knows Gong Gong (James Hong) is disappointed in his daughter for the husband and life she chose. And while being crushed with those two events, Evelyn’s strained relationship with her daughter Joy (Stephanie Hsu) continues to fracture as Evelyn wants to keep Joy’s girlfriend status with Becky (Tallie Medel) a secret from dear old conservative dad/grandfather.

That’s just about the end of the “normal” part of the story, other than Waymond has had divorce papers prepared, not for the purpose of ending the marriage, but with the hope that the threat might force Evelyn to have a real conversation with him about their relationship. Things start to get weird even before they head to the IRS meeting with an agent played with gusto by Jamie Lee Curtis, but while there, we get our first real taste of the fantastical trip we (and Evelyn) are about to take. Of course, I can’t really offer any description of the action that occurs, but nothing is spoiled if I tell you that some characters cross multiple dimensions and universes in an attempt to ‘save the world’. While doing this, they mix in some acrobatic martial arts that would make Jackie Chan envious.

It’s the rare film where the frenetic pace of dialogue keeps pace with breakneck action sequences. A fanny pack, trophies with an unfortunate shape, and blue-tooth type devices all play unusual roles here, and this film challenges everyone from the actors to the directors to the editors to the fight coordinators. You’ll likely recognize Evelyn’s husband as the grown-up version of the child actor who played Short Round in INDIANA JONES AND THE TEMPLE OF DOOM (1984), and daughter Joy is portrayed by Stephanie Hsu (a contributor to “The Marvelous Mrs. Maisel”), who gets to cover just about the widest range of character we’ve likely ever seen on screen. The estimable James Hong is a riot as Gong Gong. Mr. Hong is now 93 years old with an incredible canon of 450 credits in his 8 decades of work. His presence is quite crucial to the film. It should also be noted that, as we would expect, Jenny Slate shines in her brief role as “Big Nose”, a regular customer at the laundromat.

As terrific as the cast is, this is really a chance for Michelle Yeoh to bring her full arsenal to the role of Evelyn. She’s angry, frustrated, scared, courageous, and even adds her comic timing. Ms. Yeoh flashes her CROUCHING TIGER, HIDDEN DRAGON fighting skills, while also brining a regal presence to a film that requires a strong core. It’s no mystery that family and love can solve many of the world’s issues, and Daniels have delivered a wild ride that defies simple description. It’s a long one at 139 minutes, but you’ll thank me later for not saying much more than … it’s bonkers!

This entry was posted on Tuesday, April 5th, 2022 at 7:44 pm and is filed under Action, Comedy, Drama, Fantasy. You can follow any responses to this entry through the RSS 2.0 feed. You can leave a response, or trackback from your own site.