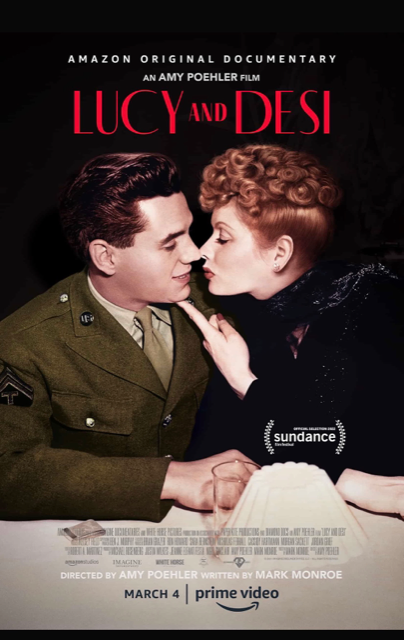 Greetings again from the darkness. Since it is arriving on the heels of Aaron Sorkin’s dramatized BEING THE RICARDOS (2021), it’s tempting to view this documentary as if a professor is grading his work … or at least fact-checking. However, Sorkin’s film, which resulted in Oscar nominations for Nicole Kidman, Javier Bardem, and JK Simmons, was based on a snapshot in time (and even took some liberties with that), while this first documentary from Amy Poehler takes a much wider lens to the life and career of Lucille Ball and Desi Arnaz.

An elite comedian herself, Ms. Poehler’s obvious admiration and respect for Lucy is understandable, and her film plays much like a tribute to her hero. She includes brief interviews with such legends as Carol Burnett, Norman Lear, Bette Midler, and Charo … each who have had enormous success in the comedy field. These folks all tip their cap to Lucy and Desi and their remarkable groundbreaking achievements with “I Love Lucy” – the most important, the most beloved, and the most long-lived sitcom in TV history.

Ms. Poehler also interviews Lucie Arnaz, daughter of Lucy and Desi. We learn a long-forgotten box of audio tapes was discovered, and that allows us to hear much of their history directly from Lucy and Desi. Lucie adds to the loving and respectful nature of the presentation, although we can’t help but notice her brother, Desi Jr, only shows up in one brief clip of a previous interview. Poehler complements the audio tapes with some excellent archival footage, including home movies that add to the personal feel.

The necessary background is provided so that we may better appreciate just what these two accomplished. Lucy’s grandfather took her to vaudeville shows, and she worked as a model prior to becoming “Queen of the B’s”. Desi’s family was affiliated with the Bacardi rum empire and lost everything in the 1933 Cuban revolution when he was 14. He worked in Xavier Cugat’s band and refined the “Conga line” that is still a party favorite these days. Lucy and Desi met on the set of the RKO movie TOO MANY GIRLS (1940) and after a whirlwind romance, the two were married shortly thereafter.

The marriage difficulties are soft-pedaled, and while it’s clear they loved each other very much, we learn that due to Desi’s stint in the Army and near-constant touring with his band, that the newlyweds saw very little of each other those first few years. In fact, that’s what inspired Lucy to demand that Desi play her husband in the new TV show. We then learn about the extraordinary business decisions that were made – not just for the show, but also in founding their own studio, Desilu, which allowed them to own their show and produce others. It was the selling of all 179 episodes of “I Love Lucy” that kicked off the whole idea of reruns, a staple of today’s television programming.

We see some classic clips from the sitcom, as well as footage of Desi performing his signature “Babaloo”. Lucy and Desi met, fell in love, worked together in the most popular sitcom of all-time, had kids together, built a revolutionary studio business together, divorced, and loved each other forever. Lucie recalls her mother visiting Desi as he lay in bed, slowly dying from lung cancer. She could hear their laughter as they watched “I Love Lucy” reruns. Is the story truth or legend?  Does it matter? The two had a lasting and historic impact on the entertainment world, both from what was on screen and from the business side of running a studio. And even today, everyone still loves Lucy.

This entry was posted on Thursday, March 3rd, 2022 at 8:53 pm and is filed under Documentary. You can follow any responses to this entry through the RSS 2.0 feed. You can leave a response, or trackback from your own site.