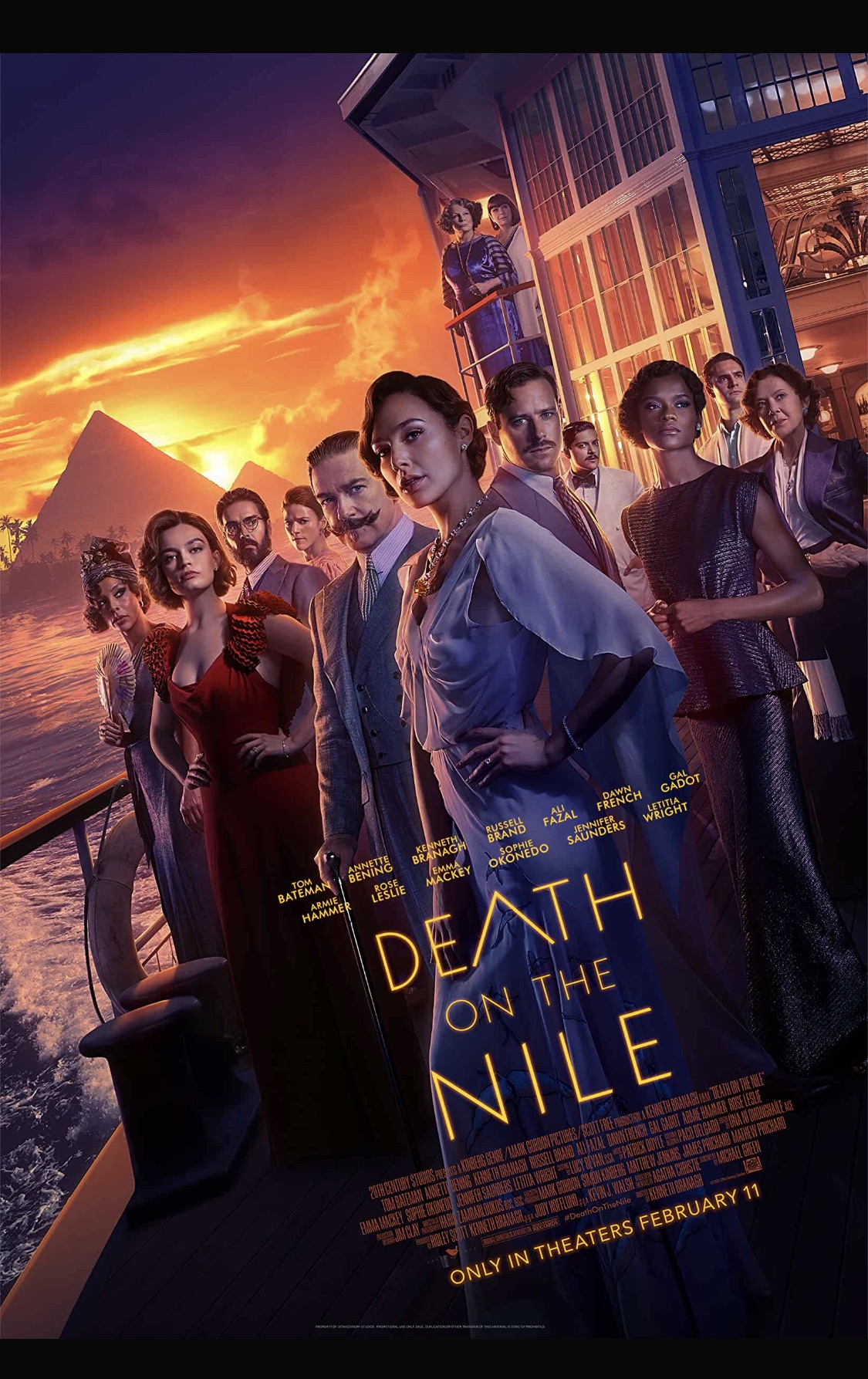 Greetings again from the darkness. For us Agatha Christie fans, a certain amount of trepidation exists every time a new movie or TV version of her work hits. Stress level was reduced a bit this time since director-actor Kenneth Branagh and screenwriter Michael Green are back following their collaboration on Christie’s MURDER ON THE ORIENT EXPRESS (2017). Although the star power this time isn’t quite at the level of ‘Orient’, it seems Mr. Branagh has grown quite fond and confident of his own Hercule Poirot, the Belgian super-sleuth.

Director Branagh takes an unusual approach with a black and white Prologue from 1914 as a young Poirot shows flashes of his intellect as a soldier in WWI. The real purpose of this segment is to show Poirot was once a young man in love, and then a wounded soldier in love, and then a broken-hearted wounded man who would go on to become the world’s greatest detective. The prologue also provides backstory on the infamous mustache that is so much a part of Poirot.

We then flash forward to a 1937 London speakeasy where a fastidious Poirot fusses over dessert while watching the formation of a shaky love triangle unfold on the dance floor as Salome Otterbourne (Sophie Okonedo, with singing vocals from Sister Rosetta Tharpe) belts out her bluesy tunes on stage. Initially it’s Jacqueline de Bellefort (relative newcomer Emma Mackey) in the throes of lustful dance moves with her fiancé Simon Doyle (Armie Hammer in the last gasp of a once skyrocketing career). Things change quickly when Jacqui’s former schoolmate, Linnete Ridgeway (Gal Gadot), makes her show-stopping appearance in a glittery metallic gown. Flash forward again, this time 6 weeks, and its Linnete and Simon tying the knot at the picturesque Cataract Hotel in Aswan on the River Nile. See, Linnete is an heiress to her less-than-scrupulous father’s fortune, and Simon had no trouble trading up. Jacqui, on the other hand, doesn’t take it so well.

Of course the fun part of Agatha Christie’s murder mysteries involves getting to know the players and watching as the clues reveal themselves, and then how Poirot handles the big reveal. This film’s only real weakness is the character development of everyone not named Hercule Poirot. We only skim the surface of Euphemia Buoc (Annette Bening) as Buoc’s (a returning Tom Bateman) disapproving mother, Dr. Windlesham (an unusually reserved Russell Brand), Linnete’s chambermaid Louise (Rose Leslie), Linette’s Godmother and her “nurse” (Jennifer Saunders and Dawn French, respectively), family attorney Andrew (Ali Fazal), and Salome’s niece and manager, Rosalie (Letitia Wright), the proverbial sharpest knife in the drawer.

So what do we get? Well, first and foremost, a fully formed Poirot. Branagh seems to have embraced the character and the mustache, having a blast with his scenes. We also get stunning work from cinematographer Harris Zambarloukos, as he films the beautiful people, the beautiful wardrobes, and such sites as the Pyramids of Giza, the Sphinx, Ramses statues of Abu Simbel, and the excellent set piece known as the Karnak luxury steamer. There are some metaphorical effects inserted that periodically startle us, and seem unnecessary, but then over-the-top moments are not unusual in film presentations of Christie’s writing. She passed away in 1976, and now there are almost 200 film and TV projects associated with her work.

Love and betrayal are key elements here, and for fans of the original book and the 1978 film version, comparisons are unavoidable. Ms. Mackey’s jilted lover stalker is a marked improvement over Mia Farrow’s character, while Salome and Rosalie and terrific additions. Ms. Saunders and Ms. French follow in the footsteps of cinematic heavyweights Bette Davis and Maggie Smith, and your choice of Branagh or Peter Ustinov as Poirot is one left up to you. It’s tough to beat ‘whodunnit escapism’, though it’s a personal choice on which of Christie’s stories serve up the best puzzle pieces on the big screen.

This entry was posted on Tuesday, February 8th, 2022 at 8:25 pm and is filed under Drama, Thriller. You can follow any responses to this entry through the RSS 2.0 feed. You can leave a response, or trackback from your own site.